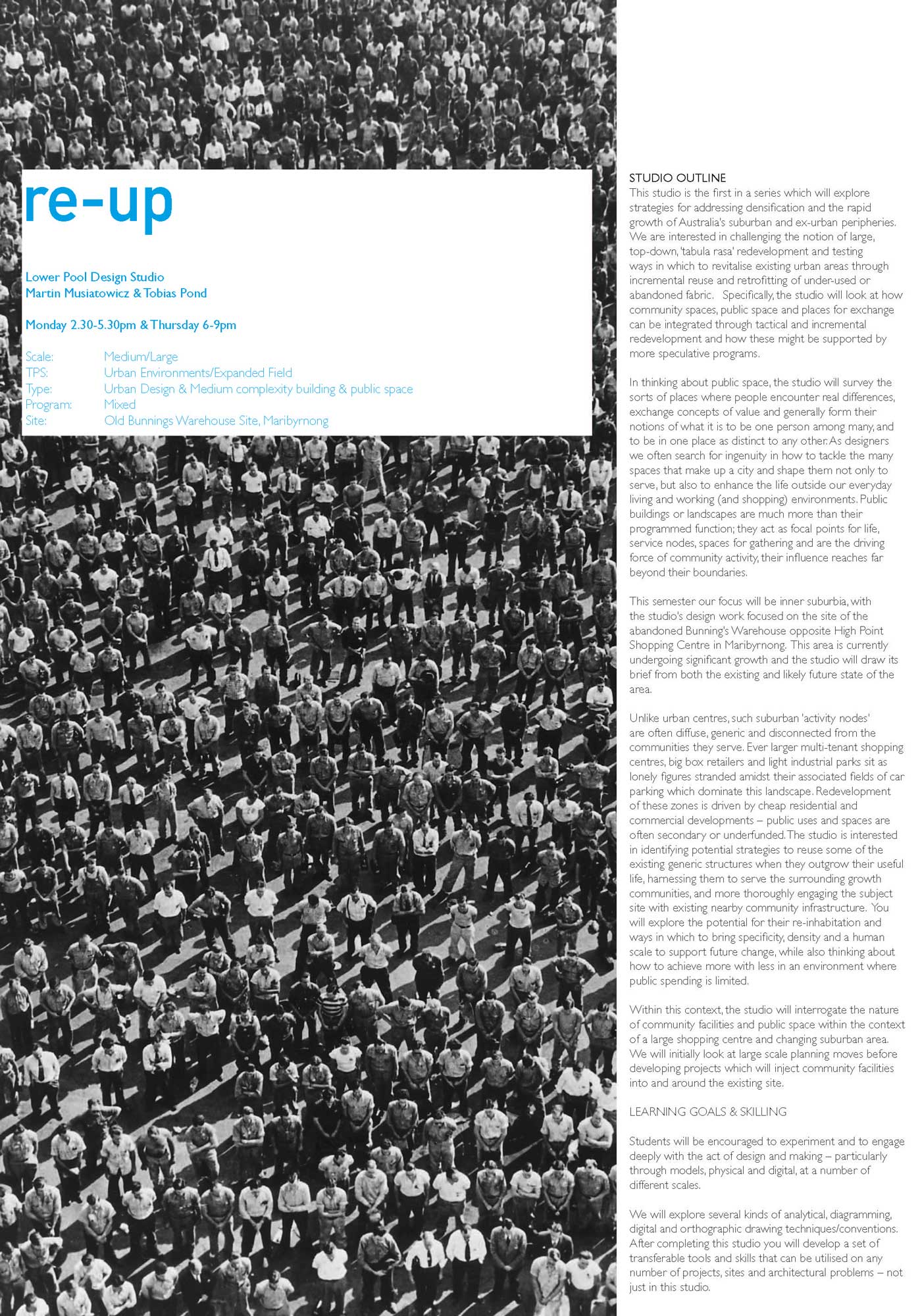 This studio is the first in a series which will explore strategies for addressing densification and the rapid growth of Australia’s suburban and ex-urban peripheries. We are interested in challenging the notion of large, top-down, ‘tabula rasa’ redevelopment and testing ways in which to revitalise existing urban areas through incremental reuse and retrofitting of under-used or abandoned fabric. Specifically, the studio will look at how community spaces, public space and places for exchange can be integrated through tactical and incremental redevelopment and how these might be supported by more speculative programs.

In thinking about public space, the studio will survey the sorts of places where people encounter real differences, exchange concepts of value and generally form their notions of what it is to be one person among many, and to be in one place as distinct to any other. As designers we often search for ingenuity in how to tackle the many spaces that make up a city and shape them not only to serve, but also to enhance the life outside our everyday living and working (and shopping) environments. Public buildings or landscapes are much more than their programmed function; they act as focal points for life, service nodes, spaces for gathering and are the driving force of community activity, their influence reaches far beyond their boundaries.

This semester our focus will be inner suburbia, with the studio’s design work focused on the site of the abandoned Bunning’s Warehouse opposite High Point Shopping Centre in Maribyrnong. This area is currently undergoing significant growth and the studio will draw its brief from both the existing and likely future state of the area.

Unlike urban centres, such suburban ‘activity nodes’ are often diffuse, generic and disconnected from the communities they serve. Ever larger multi-tenant shopping centres, big box retailers and light industrial parks sit as lonely figures stranded amidst their associated fields of car parking which dominate this landscape. Redevelopment of these zones is driven by cheap residential and commercial developments – public uses and spaces are often secondary or underfunded. The studio is interested in identifying potential strategies to reuse some of the existing generic structures when they outgrow their useful life, harnessing them to serve the surrounding growth communities, and more thoroughly engaging the subject site with existing nearby community infrastructure. You will explore the potential for their re-inhabitation and ways in which to bring specificity, density and a human scale to support future change, while also thinking about how to achieve more with less in an environment where public spending is limited.

Within this context, the studio will interrogate the nature of community facilities and public space within the context of a large shopping centre and changing suburban area. We will initially look at large scale planning moves before developing projects which will inject community facilities into and around the existing site.