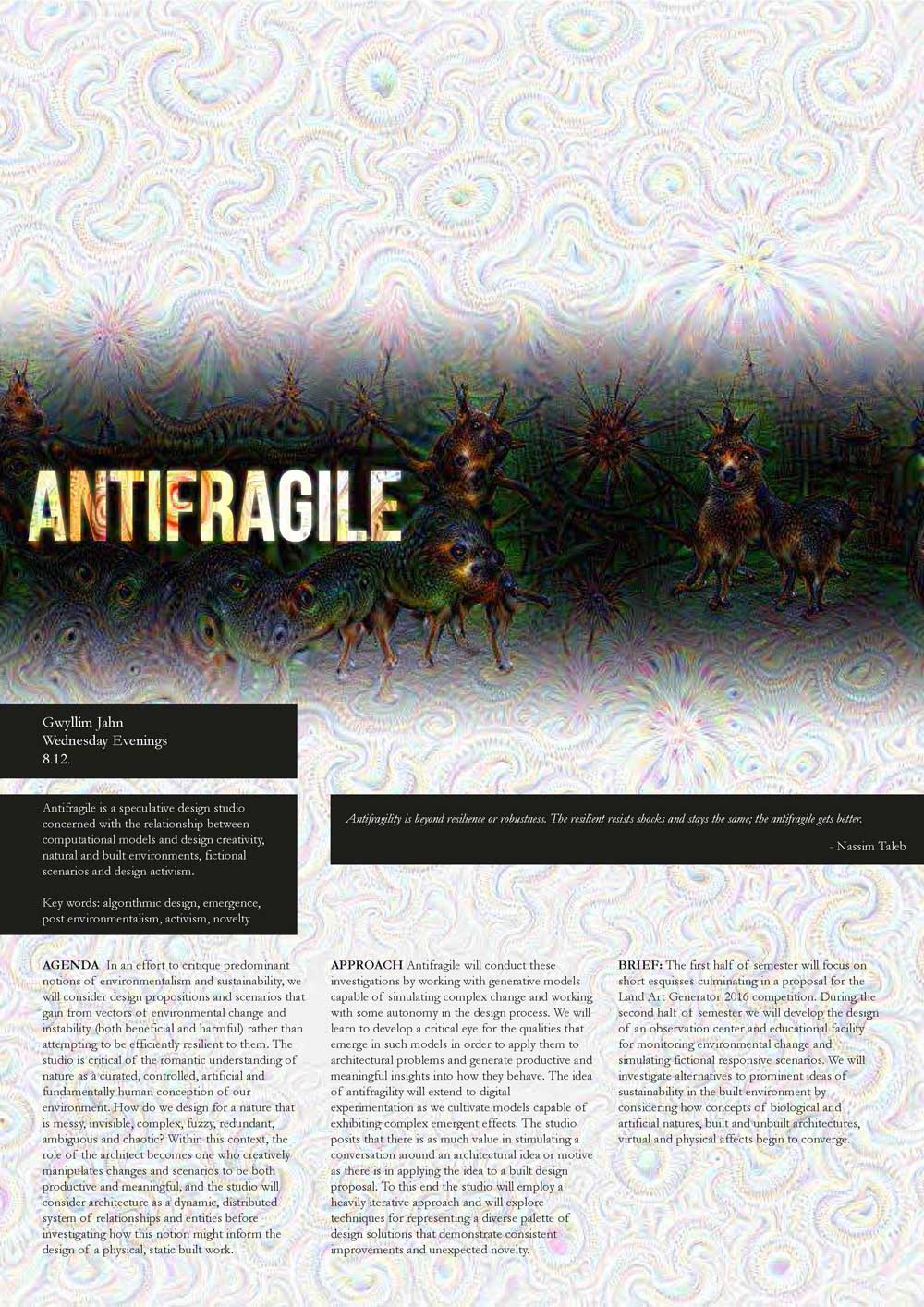 Antifragility is beyond resilience or robustness. The resilient resists shocks and stays the same; the antifragile gets better. – Nassim Taleb

Antifragile is a speculative design studio concerned with the relationship between computational models and design creativity, natural and built environments, fictional scenarios and design activism.

AGENDA In an effort to critique predominant notions of environmentalism and sustainability, we will consider design propositions and scenarios that gain from vectors of environmental change and instability (both beneficial and harmful) rather than attempting to be efficiently resilient to them. The studio is critical of the romantic understanding of nature as a curated, controlled, artificial and fundamentally human conception of our environment. How do we design for a nature that is messy, invisible, complex, fuzzy, redundant, ambiguous and chaotic? Within this context, the role of the architect becomes one who creatively manipulates changes and scenarios to be both productive and meaningful, and the studio will consider architecture as a dynamic, distributed system of relationships and entities before investigating how this notion might inform the design of a physical, static built work.

APPROACH Antifragile will conduct these investigations by working with generative models capable of simulating complex change and working with some autonomy in the design process. We will learn to develop a critical eye for the qualities that emerge in such models in order to apply them to architectural problems and generate productive and meaningful insights into how they behave. The idea of antifragility will extend to digital experimentation as we cultivate models capable of exhibiting complex emergent effects. The studio posits that there is as much value in stimulating a conversation around an architectural idea or motive as there is in applying the idea to a built design proposal. To this end the studio will employ a heavily iterative approach and will explore techniques for representing a diverse palette of design solutions that demonstrate consistent improvements and unexpected novelty.

BRIEF: The first half of semester will focus on short esquisses culminating in a proposal for the Land Art Generator 2016 competition. During the second half of semester we will develop the design of an observation center and educational facility for monitoring environmental change and simulating fictional responsive scenarios. We will investigate alternatives to prominent ideas of sustainability in the built environment by considering how concepts of biological and artificial natures, built and unbuilt architectures, virtual and physical affects begin to converge.