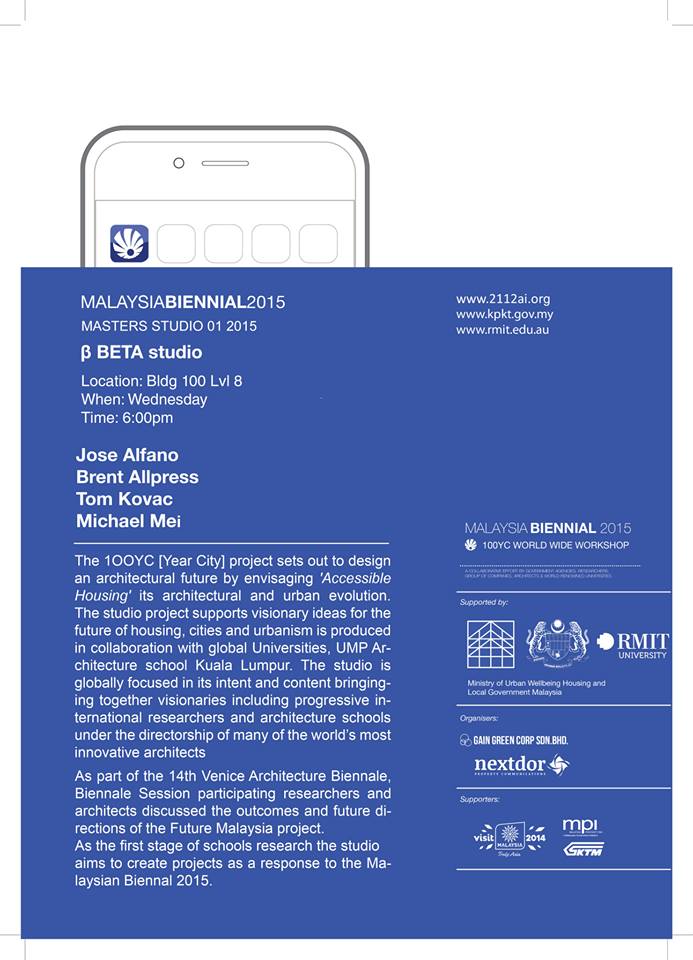 RMIT architecture alumni Giana Zulkafli and Don Nazrain were also announced as directors of the event, along with a roll call of the world’s top architects.

To be held in May next year, the Malaysia Biennial 2015 is an international, multi-disciplinary collaborative research project designed to create visionary ideas for the future evolution of cities and communities.  It  will be co-presented by RMIT in partnership with the National Housing Department of Malaysia which is part of the Ministry of Urban Well Being, Housing and Local Government (KPKT).

The biennale, dubbed 100YC (Year City) World Wide Workshop, will see more than 500 prominent architects, engineers, scientists, entrepreneurs, economists, artists, philosophers and students work together to explore a diverse set of perspectives and shape new ideas for Malaysia’s next 100 years of development, with a focus on improving quality of life via urban design, planning and creative approaches to low-cost housing development. It will include exhibitions, a symposium and online collaboration modules, with leading international architecture schools.

Professor Kovac, the Director of the 100YC program at RMIT’s School of Architecture and Design, said the event would showcase the highest levels of thought, research and design in architectural culture. He said the Biennial’s theme 100YC [Year City] World Wide Workshop aimed to create a vision for development of Malaysia – one that will enrich and transform its future – in the next 100 years.

“It is architecture’s most global gathering, where thousands of people interested in the future of Malaysia will meet and learn and we are confident of seeing many interesting possibilities,” he said.

“The ambitions of Malaysia Biennial 2015 are to create a global workshop of open source collaboration; an international event that contemplates the possibility of a future for Malaysia in the next 100 years.”

Professor Kovac, who has lectured and exhibited throughout Europe, Japan and the United States, holds the honor of being the only Australian architect invited to design a proposal for a new World Trade Centre in New York.

The Malaysian 100yr City research project was launched at the Peggy Guggenheim Museum in Venice on 23 November 2014.