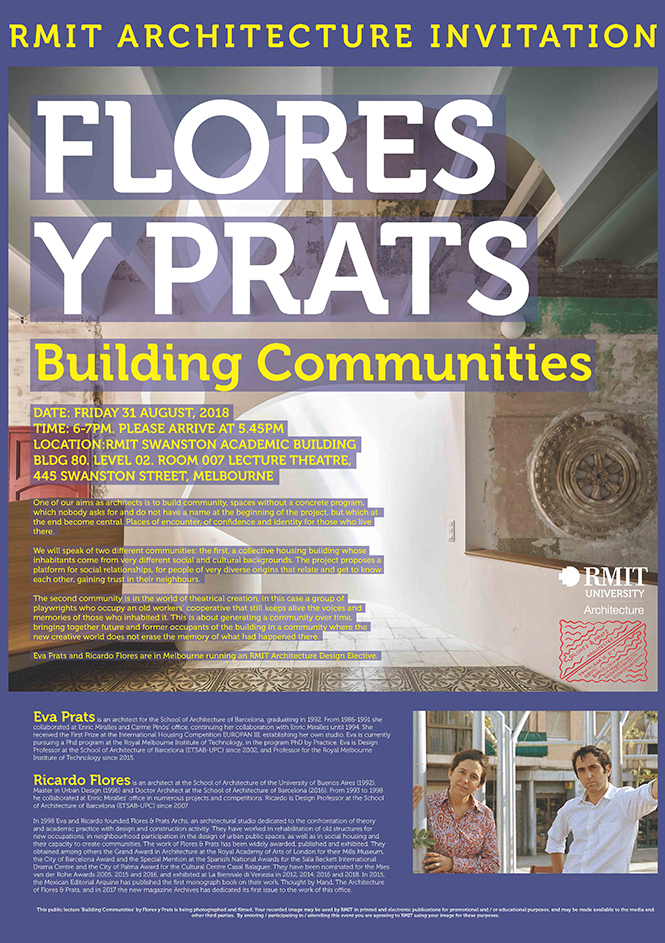 RMIT Architecture invites you to a free public lecture by EVA PRATS and RICARDO FLORES from FLORES Y PRATS.

One of our aims as architects is to build community, spaces without a concrete program, which nobody asks for and do not have a name at the beginning of the project, but which at the end become central. Places of encounter, of confidence and identity for those who live there.

We will speak of two different communities: the first, a collective housing building whose inhabitants come from very different social and cultural backgrounds. The project proposes a platform for social relationships, for people of very diverse origins that relate and get to know each other, gaining trust in their neighbours.

The second community is in the world of theatrical creation, in this case a group of playwrights who occupy an old workers’ cooperative that still keeps alive the voices and memories of those who inhabited it. This is about generating a community over time, bringing together future and former occupants of the building in a community where the new creative world does not erase the memory of what had happened there.

Eva Prats is an architect for the School of Architecture of Barcelona, graduating in 1992. From 1986-1991 she collaborated at Enric Miralles and Carme Pinós’ office, continuing her collaboration with Enric Miralles until 1994. She received the First Prize at the International Housing Competition EUROPAN III, establishing her own studio. Eva is currently pursuing a Phd program at the Royal Melbourne Institute of Technology, in the program PhD by Practice. Eva is Design Professor at the School of Architecture of Barcelona (ETSAB-UPC) since 2002, and Professor for the Royal Melbourne Institute of Technology since 2015.

In 1998 Eva and Ricardo founded Flores & Prats Archs, an architectural studio dedicated to the confrontation of theory and academic practice with design and construction activity. They have worked in rehabilitation of old structures for new occupations, in neighbourhood participation in the design of urban public spaces, as well as in social housing and their capacity to create communities. The work of Flores & Prats has been widely awarded, published and exhibited. They obtained among others the Grand Award in Architecture at the Royal Academy of Arts of London for their Mills Museum, the City of Barcelona Award and the Special Mention at the Spanish National Awards for the Sala Beckett International Drama Centre and the City of Palma Award for the Cultural Centre Casal Balaguer. They have been nominated for the Mies van der Rohe Awards 2005, 2015 and 2016, and exhibited at La Biennale di Venezia in 2012, 2014, 2016 and 2018. In 2015, the Mexican Editorial Arquine has published the first monograph book on their work, Thought by Hand. The Architecture of Flores & Prats, and in 2017 the new magazine Archives has dedicated its first issue to the work of this office.