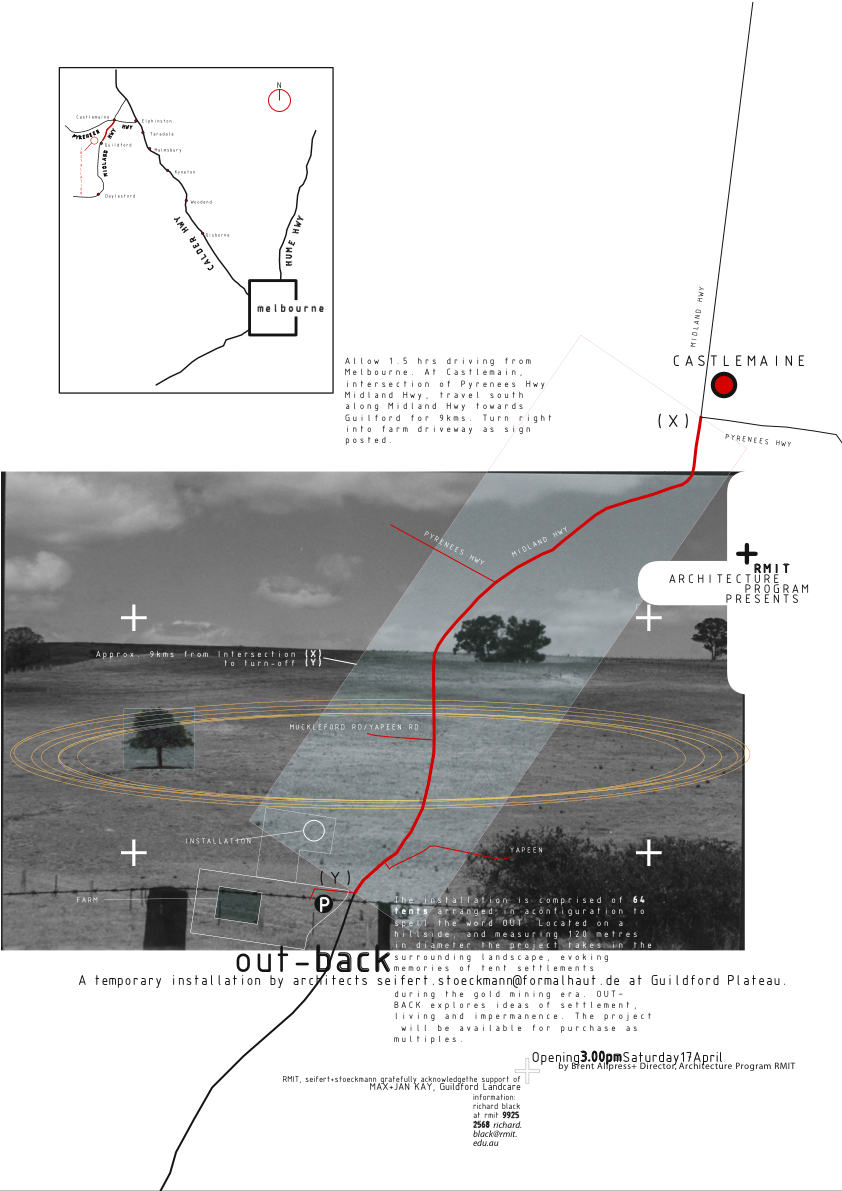 Sixty small, light-blue tent pixels were laid out to form the nested letters O-U-T. The tent arrangement and placement was surveyed through an anamorphic projection to snap into a clear and regular figure from a position across the valley.

The outer ring of tents forming the letter O was inscribed in gold graffiti, employing the word out in its spatial connotations, such as out-side.

The tents forming the nested U figure were inscribed with social connotations of out, such as out-siderand out-cast.

The tents forming the central figure can be read as a lower case letter t, but also as a cross, memorialising exclusion and the absence of first inhabitants.

THE GUILDFORD PLATEAU north-west of Melbourne has a unique geography. A worn-down elevated plateau, it has been carved out by streams to form snaking valleys. Most roads and towns occupy these valley floors and the datum of the plateau above can only be experienced as an interrupted horizon if you clamber up onto the hilltops. In the 19th century this was gold-rush territory, a frontier region populated by prospectors living in temporary tent cities. The landscape bears the scars and ruined traces of this unruly history.

In April a Land Art-scale tent installation, designed by the Frankfurt-based architectural practice Seifert Stöckmann, was erected on a valley slope on the Kay farm property near Guildford township, responding to this geography and cultural history.

Alongside their architectural practice, Gotz Stöckmann and Gabby Seifert manage to teach, respectively, at the AA in London, and TU Innesbruck in Austria. Over the past 15 years they have also maintained the collaborative practice, Formalhaut, with the sculptor Ottmar Horl and other artists. They undertake temporary architectural installation projects incorporating work by artists that maintain the autonomy and differences of each discipline.

The culmination of Formalhaut’s work is the Living Room project (MONUMENT Residential Special 2002), which involved the work of artists in the construction of a small house in Gelnhausen near Frankfurt. The dwelling excessively constrains private spaces to maximise the shared living area as a single volume defined by a perforated envelope. But the investigation of the minimal dwelling as a singular prosthetic container has been a recurring architectural concern selectively tested through the installation work.

An early absurdist scheme involved tethering cows in orthogonal containers clad in translucent sheeting. In another project, they dismantled a caravan and its components were categorised as a kit of parts, an iconoclastic revision of the Archigram obsession with mobility that asks a different architectural question about the organisation and articulation of a minimal or temporary architecture.

Seifert and Stöckmann have been exploring the tent as a form of ephemeral lightweight architecture through a series of installations across Europe. They have a particular interest in how the tent mediates between the scale of clothing and building:

“Small house tents are feather-light living rooms. We are interested in their potential as shelter. Their sewn construction compares to clothes, whereas their spatial volume compares to houses. One can say: tents are more lightweight than houses but bigger than clothes. If people wear beautiful and charming clothes we would tell them: that suits you well.” 1.

Tents are a mass-produced manifestation of the transitory nature of inhabitation in modern culture. With the “Out-Back” installation the tents acted as an unsettling reminder of the displacements involved in colonising a landscape.

Earlier this year, while running an undergraduate design workshop at RMIT with two teaching assistants from TU Innesbruck, Seifert began scouting for a site for the tent installation, and negotiating a good bulk purchase deal with a tent supplier. Stöckmann arrived soon after and together with the students they constructed the installation at Guildford.

The tents form an encampment, evoking the transitory tent cities that spread across this land as a tenuous settlement during the gold rush, and reaffirming the tenacity of the settler families who stuck it out once the gold had gone.

The word O U T was surveyed employing perspectival correction so that it snapped into focus as a regular figure from an adjacent valley slope. The abstract formal operations of the composition and the graphic quality of blue, scaleless tent pixels, read effectively against the pale, dry-grass slope as an artificial and ornamental figure. This provokes a reconsideration of the existing infrastructure of familiar fence-lines and farm-tracks as ephemeral cultural inscriptions, framing and ordering an engagement with the land.