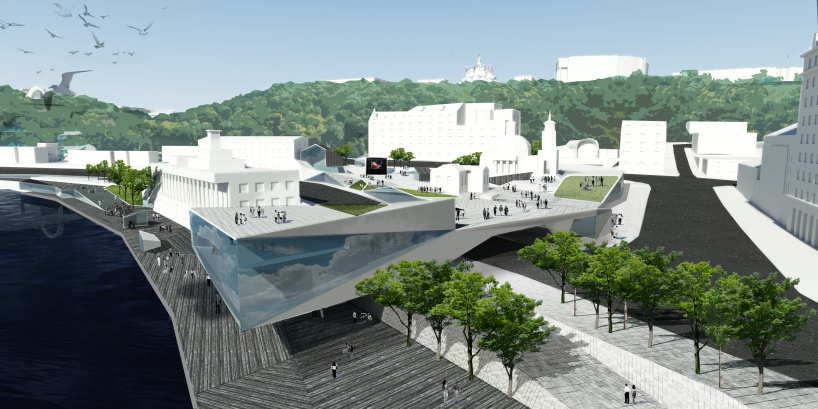 Eroding the Edge was a speculative project prepared in response to an call for proposals demonstrating how the riverfront of Kiev (Ukraine) could be reorganised to better integrate the city with the river. The brief required an urban scale masterplan, tested at a specific location through an architectural scale intervention.  The design explores generative approaches in design, specifically generative tracing as a technique of ‘versioning’ the city. Generative tracing is understood as an erosive operation that effectively creates a new network of urban pathways and waterfront settlements. The project posititions urban design as being part of an extended evolutionary process in which a city is engaged.  The design contributes a series of techniques for generating new versions of a city – specifically urban edge conditions. The architectural outcomes of this process can be read as a form of ‘urban fold’ whereby the existing conditions have been deformed through an machinic process to create a further material iteration of the city. The final design is a series of manifold urban frontages that operate as an urban enabler, effectively activating a region of the city that had previously been largely unoccupied by pedestrian traffic.’Eroding the Edge’ was shortlisted and received 3rd prize in the international Kiev Edge Competition, the entry was exhibited in Kiev at the Canactions conference, and published in the competition cataloguge.  The project was published in Architecture and Culture Magazine #364, in “Idea Design: Evolving Architecture (ISBN: 978-89-7212-144-2)” and online in numerous locations.