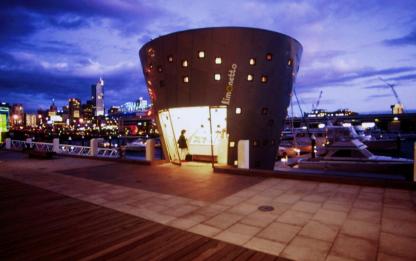 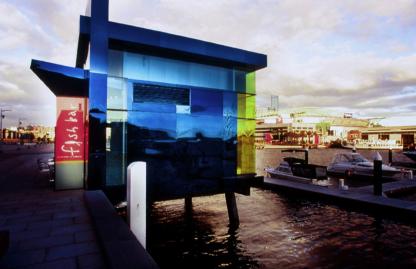 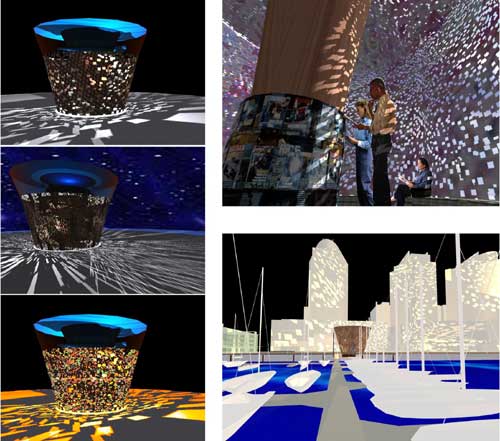 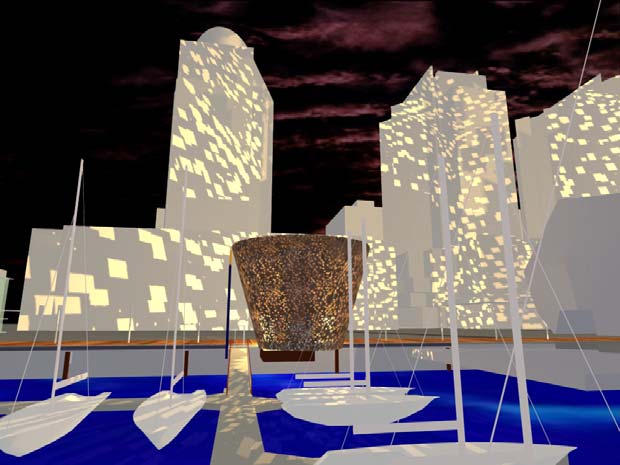 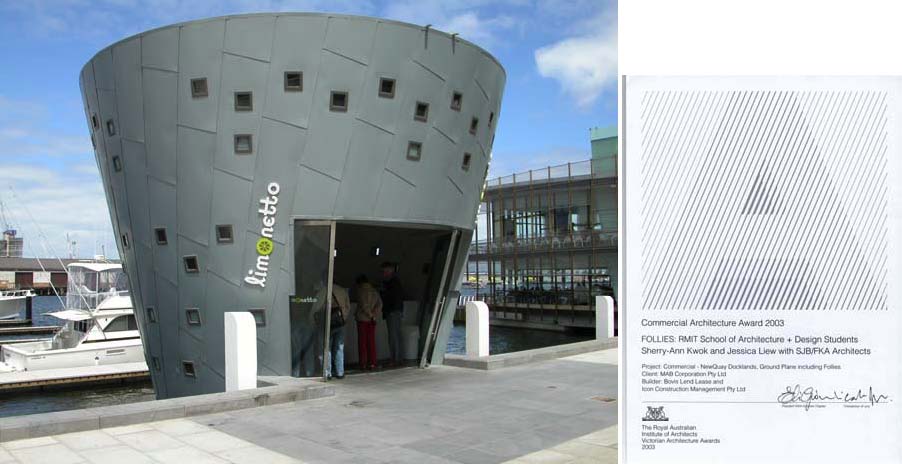 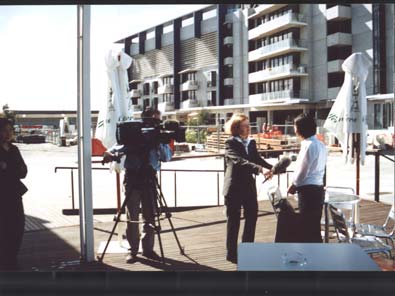 In semester 01, 2001 a limited design competition was held in an Architecture Program Upper Pool Design Studio for the design of 3 low rise retail outlets (follies) in the New Quay Precinct Melbourne’s Docklands (which at that time had just commenced construction). The Competition was developed withMAB developers for the New Quay Waterfront Precinct and the New Quay Architects Synman Justin Bialekand Nation Fender Katsalidis Architects, (Plus Architecture). Vivian Mitsogianni led the studio with assistant tutor Stuart Harrison, while practising artists Callum Morton, David Rosetzky andAlexander Knox worked with the university students to inform the design outcomes. The studio aimed to investigate the relationship between art and architecture through the design of the follies.

Following the announcement of the Competition in Semester 01 2001, Jessica Liew + Sherry Anne Kwok were employed in the offices of Synman Justin Bialek and Nation Fender Katsalidis Architects, (Plus Architecture) through the Developed Design & Documentation Stages of the Project. The student designed Docklands New Quay Follies construction was completed in 2003.

The construction of the follies has been completed as an integral part of the MAB New Quay Waterfront Precinct in Melbourne’s Docklands. The project design is credited as:
RMIT Architecture Students Jessica Liew + Sherry Anne Kwok with Synman Justin Bialek and Nation Fender Katsalidis Architects, (Plus Architecture).

The students – Jessica Liew, 22, of Malaysia, and Sherry-Ann Kwok, 23, of Singapore – are from the university’s School of Architecture and Design. The international students won the right to have their designs for two unique buildings realised on the NewQuay waterfront as part of MAB’s commitment to art and design.

The students’ iconic ‘folly’ buildings are intended as small retailing outlets on the water’s edge, adding character and vitality to the NewQuay promenade.

The winning designs were selected through a competition run by MAB Corporation in association with RMIT University’s School of Architecture and Design, in a design studio called ‘Loaded’. Twelve fourth-year students participated over a seven-week period.

RMIT lecturer Vivian Mitsogianni led the studio with assistant tutor Stuart Harrison, while practising artists Callum Morton, David Rosetzky and Alexander Knox worked with the university students to inform the design outcomes. The studio aimed to investigate the relationship between art and architecture through the design of the follies.

Ms Liew and Ms Kwok will work with NewQuay architects, leading firms Nation Fender Katsalidis, and Synman Justin Bialek to develop their design to a stage where the designs are ready for tender and construction. Prominent architect Karl Fender chaired the competition, frequently visiting the studio as a guest critic.

Mr Fender said the winning design was chosen because it fulfilled the brief in an imaginative way. “The two pieces are like crafted jewels with very highly worked facades that provide an interesting internal environment,” Mr Fender said.

“They are made of a myriad of different types of materials to create optical effects through refractive and reflective illusions.

“At night they can be very interesting, glowing on the edge of the promenade as foci, and in the day their shapes are very pleasing and provide an interesting ambience.”

The second prize was awarded to students Daiman Otto and Craig Chapman, and the third prize to Chern Yih Lee and Yin Chao Lim.

MAB Corporation Managing Director Mr Andrew Buxton said the competition was designed to give young architects a major commission that would allow them to display their talent and imagination.

“It is also a chance for them to make their mark on Melbourne with iconic designs that will become focal points of the waterfront at NewQuay,” he said.

The MAB Docklands commission comes two months after the award of a $500,000 sculpture commission to Gippsland sculptor Adrian Mauriks, whose imposing 4.6m piece titled ‘Silence’ will adorn a plaza on the NewQuay promenade.