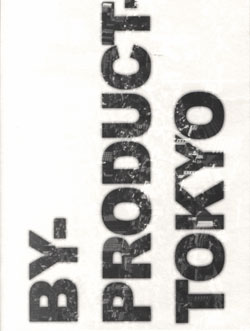 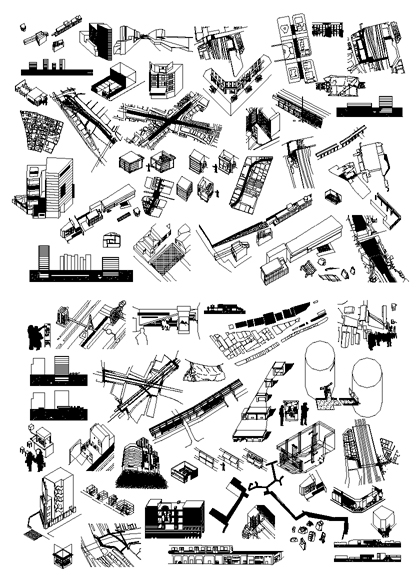 The BY-PRODUCT-TOKYO book and online project archive document urban research undertaken in Tokyo by RMIT Architecture staff and students, hosted on exchange by the Tokyo Institute of Technology. This study doesn’t seek or provide any general (abstract) theories on what “Tokyo is”; rather it collects and analyses an open-ended series of small discrete situations. The method was to look for functioning particularities rather than determining rules. An architectural consideration is directed to the physical arrangements of Tokyo through the examination of elemental and knowable elements of the city, rather than an immersion in broad scale and generalised conceptions. This position views the composition and arrangement of small ecosystems within the city as an index of particular physical and cultural qualities.

Elements as small as vending machines and as large as the Tokyo Metropolitan Motorway, their location and their interrelationship with both fixed and mutable elements are considered. Students have inquired into the temporary or makeshift, the shape of spatial interstices and the role of signage and pedestrian trajectory. In such examinations we begin to see the forces that create these very particular arrangements and more importantly the apparently unforeseen consequences of many of these ecosystems.

An initial aim to discover where newness occurred in the city was gradually replaced through the activity of investigation by the realisation that these ecosystems were by-products of processes and historical and contemporary decision making that had quite different aims.

“By-Product-Tokyo is an outcome of a research project instigated by Shane Murray, lead by Marika Neustupny and Nigel Bertram, and involving ten students from RMIT. It offers an intriguing set of observations on the city of Tokyo and raises pertinent questions regarding the relationship between architecture and other disciplines, architecture’s role within the city, and the limits of urbanism’s tendency towards totalizing concepts of the city – which are arguably futile for understanding a city like Tokyo. As an alternative, this volume presents a series of “urban ecosystems”, analyzed with particular regard for the insubstantial, the temporary and the mobile.

By-Product-Tokyo observes and records empirical relationships and looks to the byproduct – “the lack of fit between concepts and situations” – rather than explaining the city through architecture or formal processes of planning. Three key by-product categories – improvisation/temporary fit, overlap/messy fit, convenience/neat fit – are described by Neustupny and Bertram and elaborated upon by the students. Their investigations and analysis of particular situations lead to ten further themes, such as “permanently makeshift”, “bottleneck and shortcuts” and “unfilled gaps and holes”. These “functioning particularities” are described by isometrics, photos and maps. The distinctly static and architectural method of presenting what is normally posited outside of architecture – occupations, signage, appropriations – successfully highlights the conditions of flux, relations between things, and more generally the idea of the urban ecosystem with various phenomena being relative and contingent rather than closed and self-referential.

By-Product-Tokyo also acknowledges the “active inhabitation” practiced by the occupants who exploit this lack of fit to appropriate and customize the city so that it is more responsive to their needs – a mutual imbrication of inhabitant and structures/ events that provides freedom over prescription. Understood in these terms the contemporary city of Tokyo is vital, dynamic and inclusive.
The book is, in part, an extension of research that has been undertaken in association with the Tokyo Institute of Technology since the early 1990s. Previous publications, which are companions to this one, are Made in Tokyo and Pet Architecture Guide Book by Atelier Bow Wow and Tokyo Institute of Technology Tsukamoto Architectural Laboratory. By-Product-Tokyo differs from these earlier projects by celebrating the insubstantial, the temporary and the mobile and by acknowledging the power of the city’s practitioners. Further it exploits the fresh eye of the outsider – students of architecture from Melbourne – to note what is foreign, unfamiliar and thus particular to Tokyo. By-Product-Tokyo does not provide architectural and urban propositions but situates itself adjacent to design. From this position it effectively challenges the limits of disciplinary categories and the banal appropriation of the city to explain and legitimize the architectural design process.”

RMIT Architecture Students travelled to Tokyo on a UMAP grant, hosted by the Tokyo Institute of Technology. They undertook a design studio within the Tsukamoto Lab at TITech, supervised by Yoshiharu Tsukamoto, Tsukamoto Lab Director, Atelier Bow Wow, and Kazunari Sakamoto, TITech.

Nigel Bertram, Shane Murray, Marika Neustupny of the RMIT Urban Architecture Laboratory ran a concurrent urban research seminar with RMIT students undertaking guided research and drawn analysis of Tokyo urban context and infrastructural fabric. This work is documented in the BY-PRODUCT TOKYO Project Archive and is published along with essays and critical text in the BY-PRODUCT TOKYO bookpublished through RMIT Press.