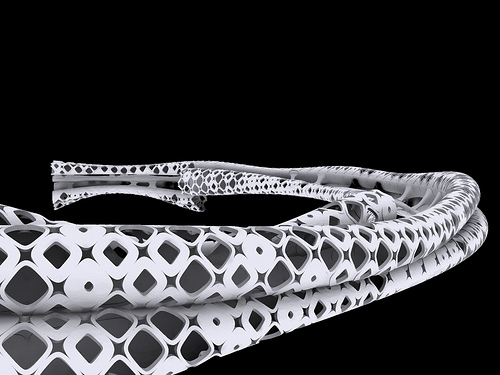 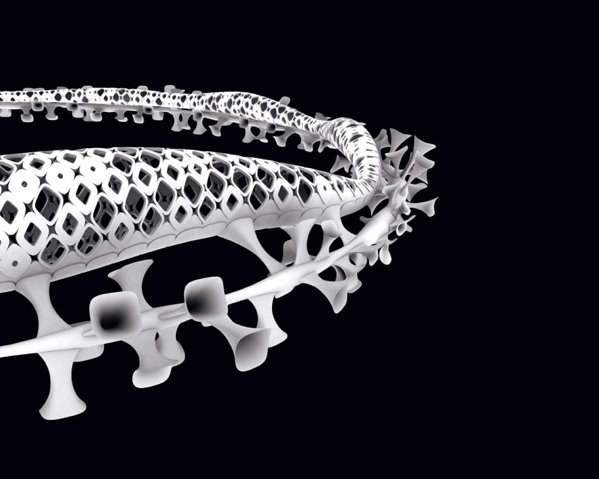 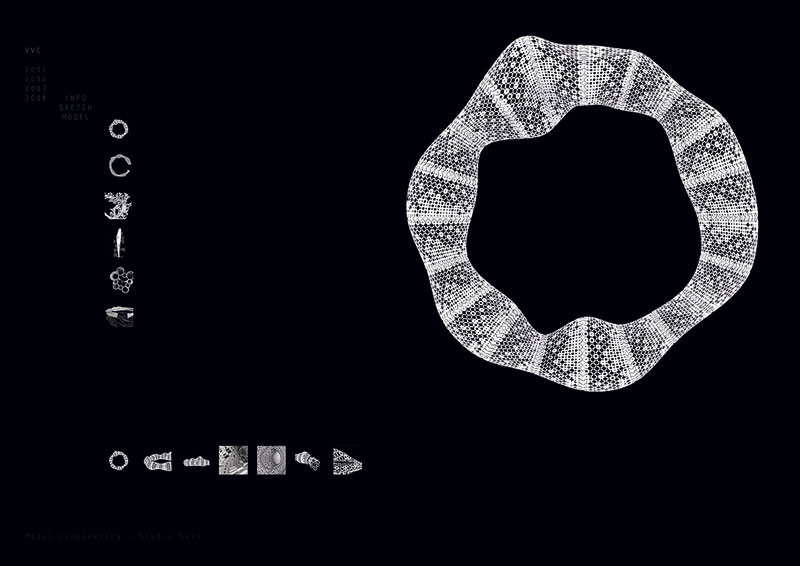 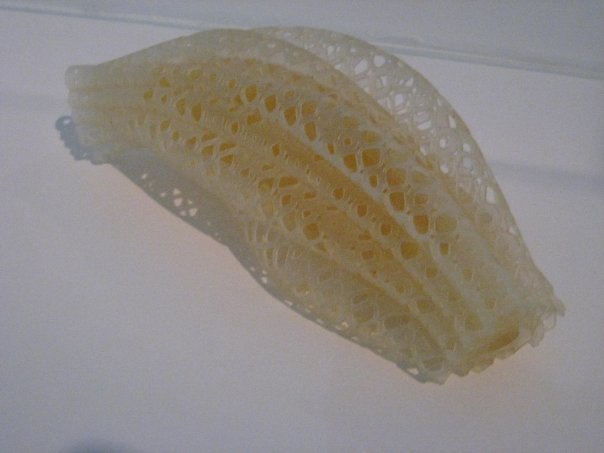 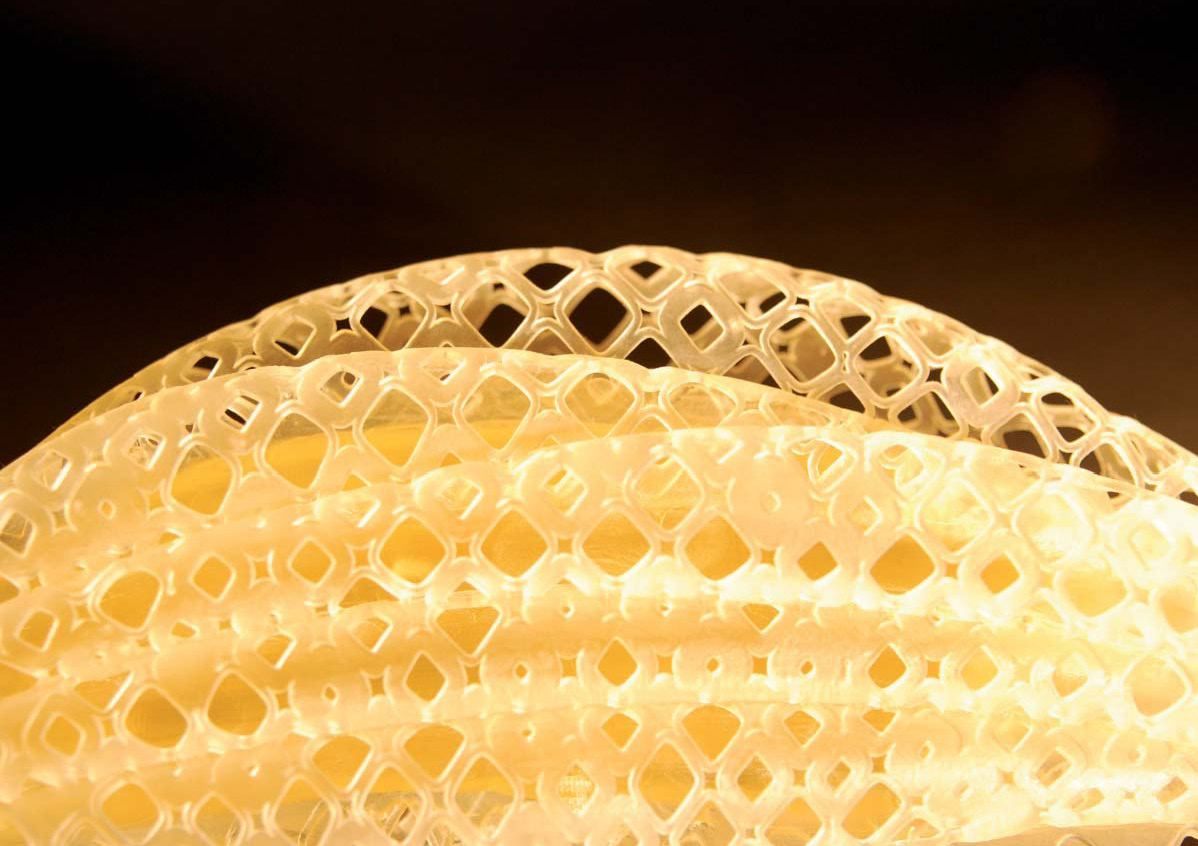 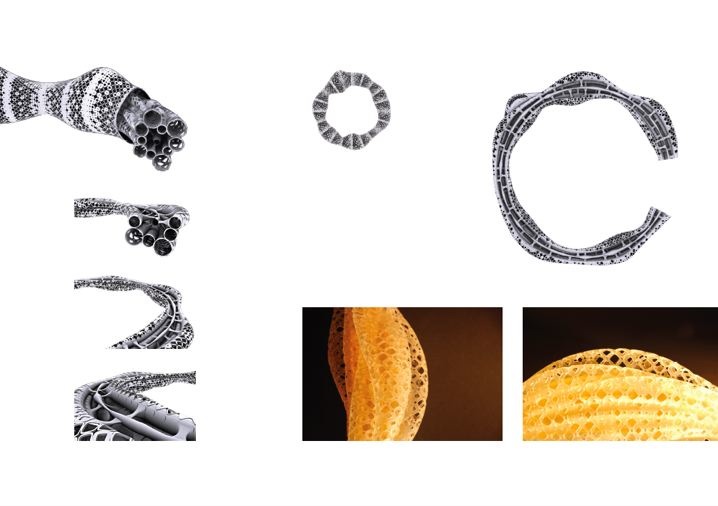 Architecture’s transformation through computer technology will be the topic of the third section, curated by Marie-Ange Brayer, which will display 45 works created by architects following three conceptual areas: Flux City, Bio Body and Design Yourself.

In the mid-1990s, Tom Kovac began to experiment with the most cutting edge technology, particularly in the realm of digital environment design. His projects stand out due to the presence of enveloping surfaces that reveal the differential continuity of the shapes.

The exploration of the surface’s plasticity and the investigation of light and fluidity were also inspired by visual arts (Richard Serra and Donald Judd) and even by Frederick Kiesler. Kovac places digital technology at the service of new spatialisation devices and develops a new dynamic of the surfaces that integrates architecture’s relationship with its surroundings. Urban factors are formally reconditioned in the project’s interior, while nature and topography define the formal characteristics of certain single-family house designs. Kovac defends a “new phenomenological use of digital tools.” With his approach, he seeks to create a “new materiality shaped by processes that transgress the inert state of architecture.” The project for the Biennale in Sevilla is a virtual pavilion which focuses on creation for virtual communities to participate in the spatial paradigm shift in form and spatial production. Virtual environments, when supported by a spatially unifying concept, offer the possibility that learning communities in the digital city can be both more dispersed and more intensely related than heretofore. While sites such as Facebook allow viral clustering of individuals with like interests, Tom ask what kind of relationships between real and virtual environments offer support to learning communities.

Kovac has been exploring relationships between real environments, rich in sensory and spatial information and virtual environments developed around emerging communication software application Quick-Links that is information rich. Kovac proposes the creation of a user “information” generated pavilions, web 3.0 visual models for engagement and self-monitoring that offer positive outcome in the Digital City. The gathered data of user interactions and information exchange in collaborative software “quick-links” will be transformed into a dynamic spatial environment proposing an emerging tool for transforming data creating 3D spatial intelligence. This Virtual Pavilion will be online at the Seville Biennial. The project will be produced with the aim of having both physical as well as an internetenabled online presence.

Tom Kovac, of Slovenian origin, has lived in Australia since 1970. In 1997 he graduated as a Master of Architecture from the Royal Melbourne Institute of Technology (RMIT), where he currently works as a professor. Upon completing his master’s degree, he founded the Kovac Architecture studio in Melbourne. In 1994, he created the Curve Architecture Gallery in Melbourne. His projects have been featured in numerous exhibitions in Europe and the United States. Noteworthy appearances include his participation in the Venice Architecture Biennial in 2000 and 2002, as well as the exhibition Non-Standard Architectures organised by the Centre Pompidou in 2003. Kovac has built and redesigned numerous shops, bars, restaurants and single-family houses in Melbourne. He was the only Australian architect invited to submit a proposal for the World Trade Center reconstruction project in New York.

This project focuses on public behaviours that sustain creative communities. It promotes the creation of digital environments for virtual communities to participate in a spatial paradigm shift in formal and spatial production. Virtual environments, when supported by a spatially unifying concept, offer the possibility that learning communities can be both more dispersed and more intensely interrelated. While sites such as Facebook allow viral clustering of individuals with like interests, this project examines what kind of relationships between real and virtual environments might offer support to learning communities.

The project has been exploring relationships between real environments, rich in sensory and spatial information and virtual environments developed around emerging communication software applications such as quick-links that are information rich. This project proposes the creation of user information generated pavilions, web 3.0 visual models for engagement and self-monitoring. The gathered data of user interactions and information exchange sourced from collaborative software systems is transformed into a dynamic spatial environment offering an emerging tool for transforming information to create qualitative 3D spatial intelligence.

The spatial composition generates a pliability transforming programmatic data into potentials for creating infinite variations of form and space. It’s transformation with surfaces of dynamic unity explores the dichotomies between top and bottom, interior and exterior and seek an absence of unequivocal distinctions.