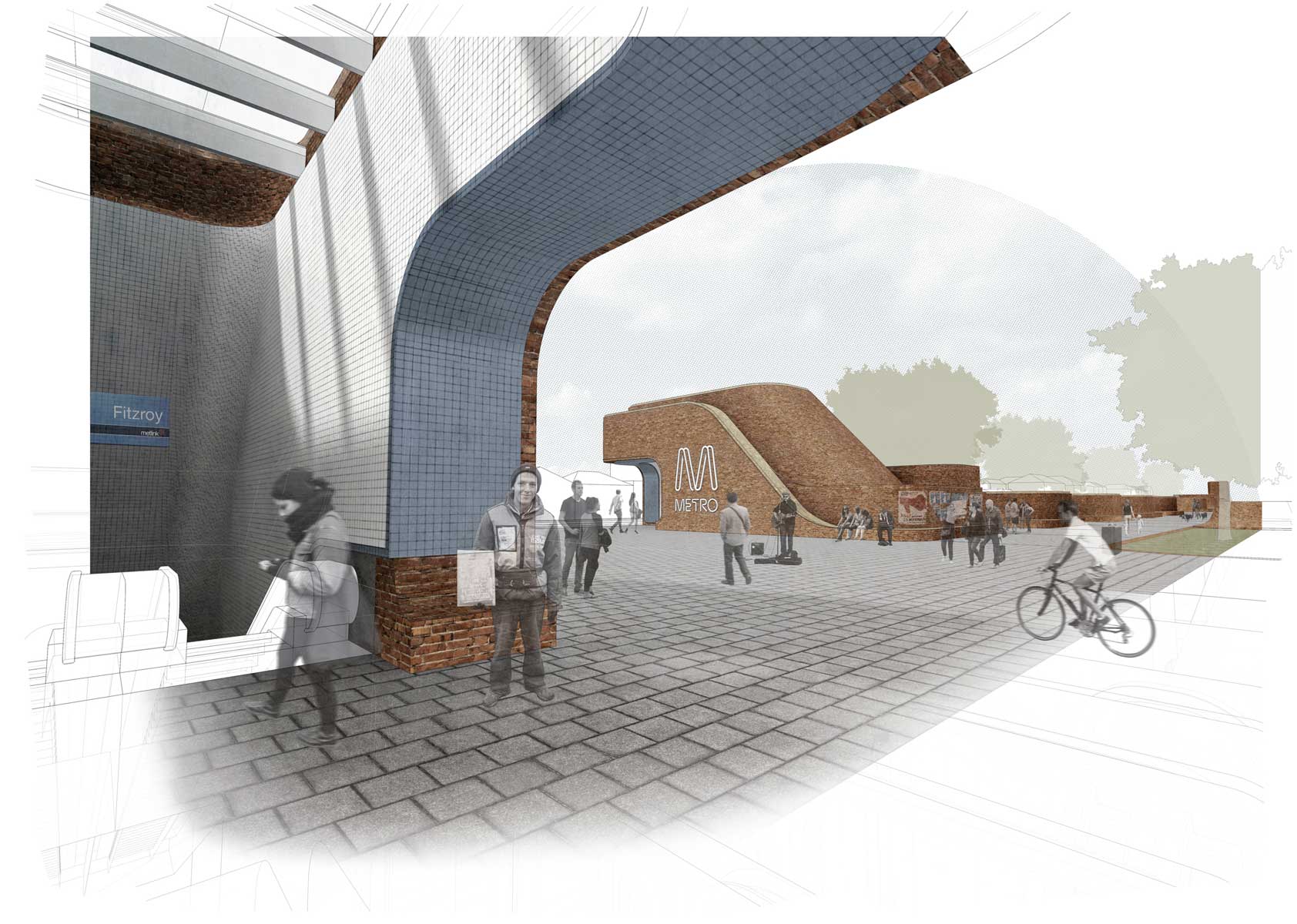 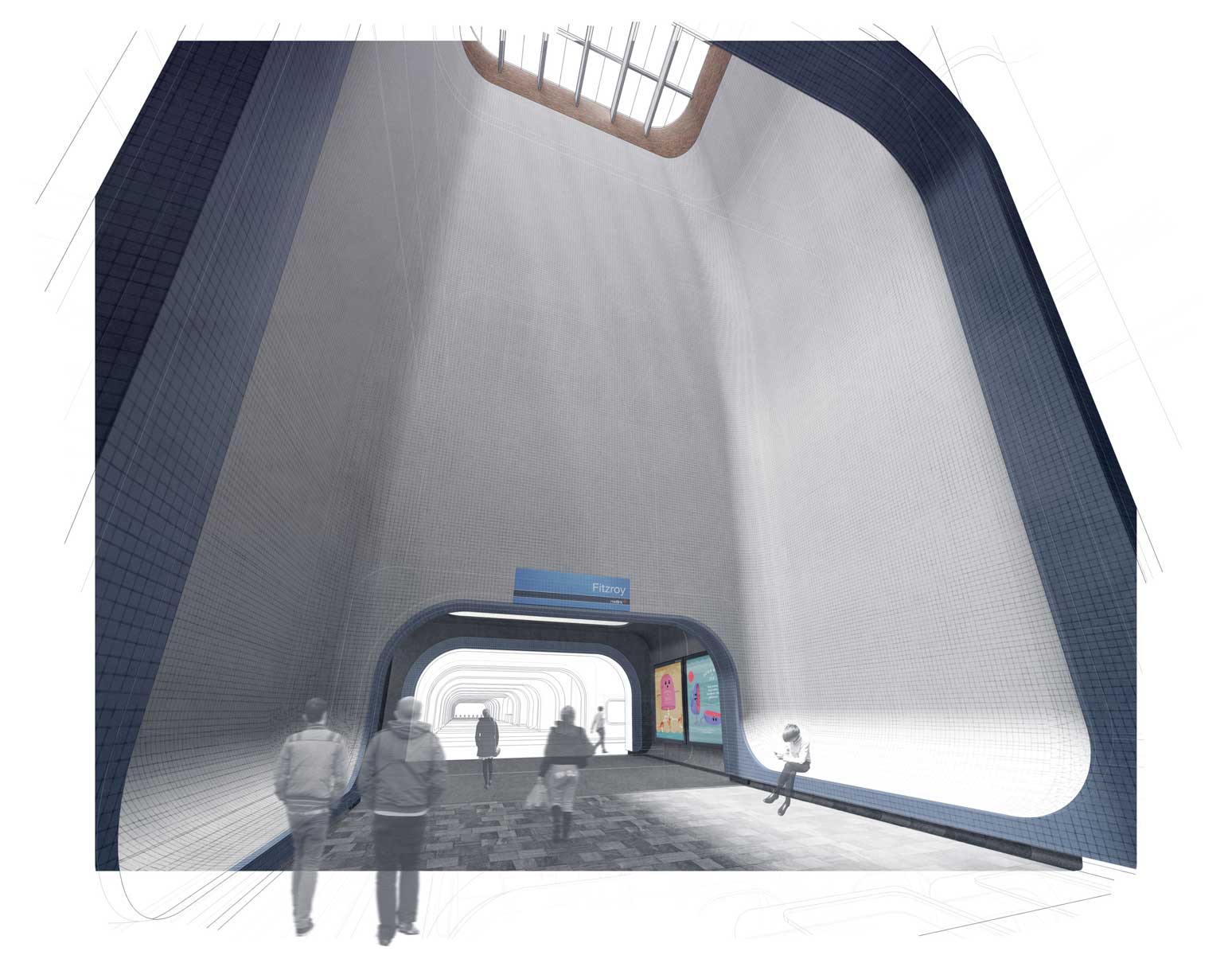 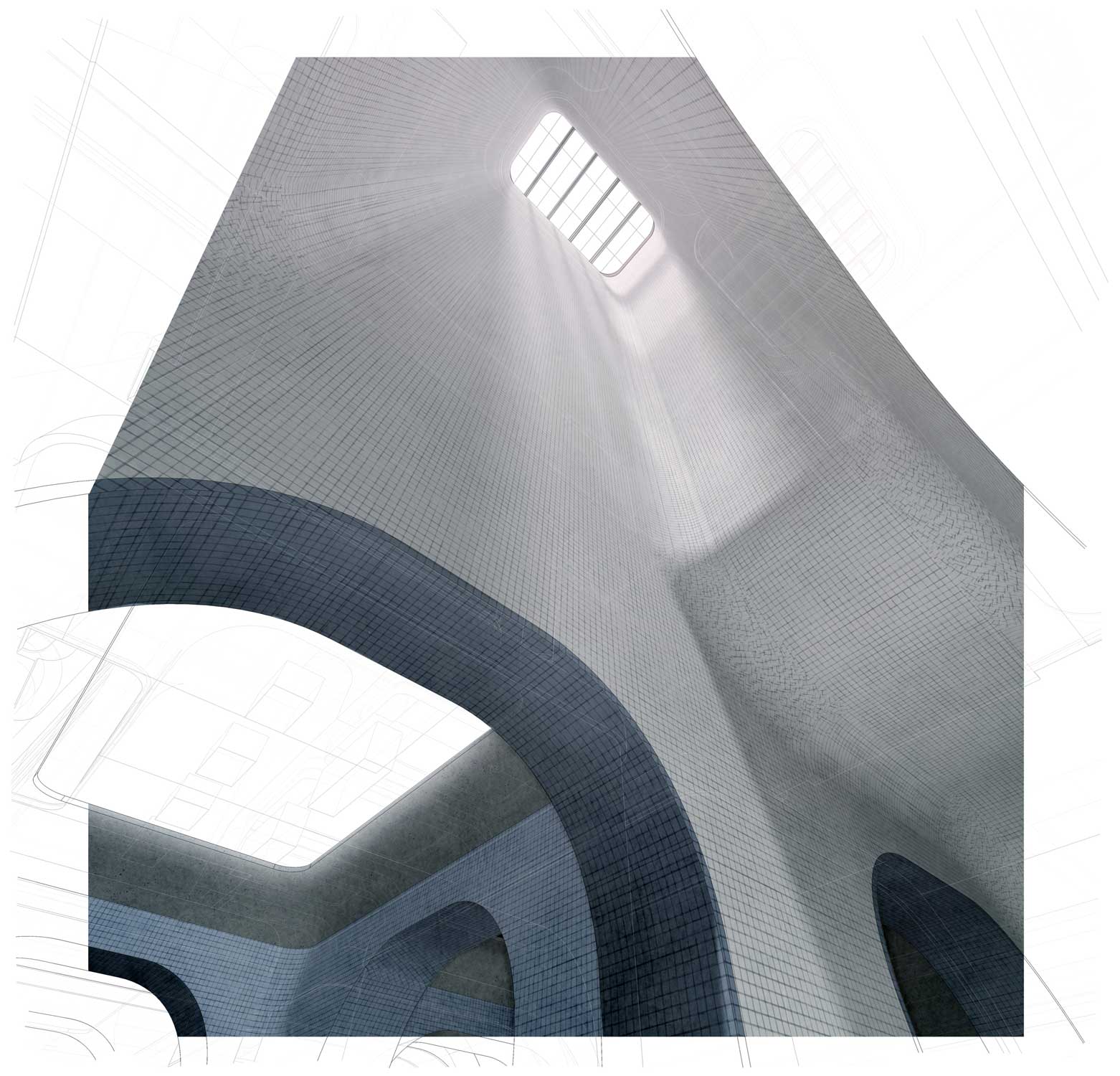 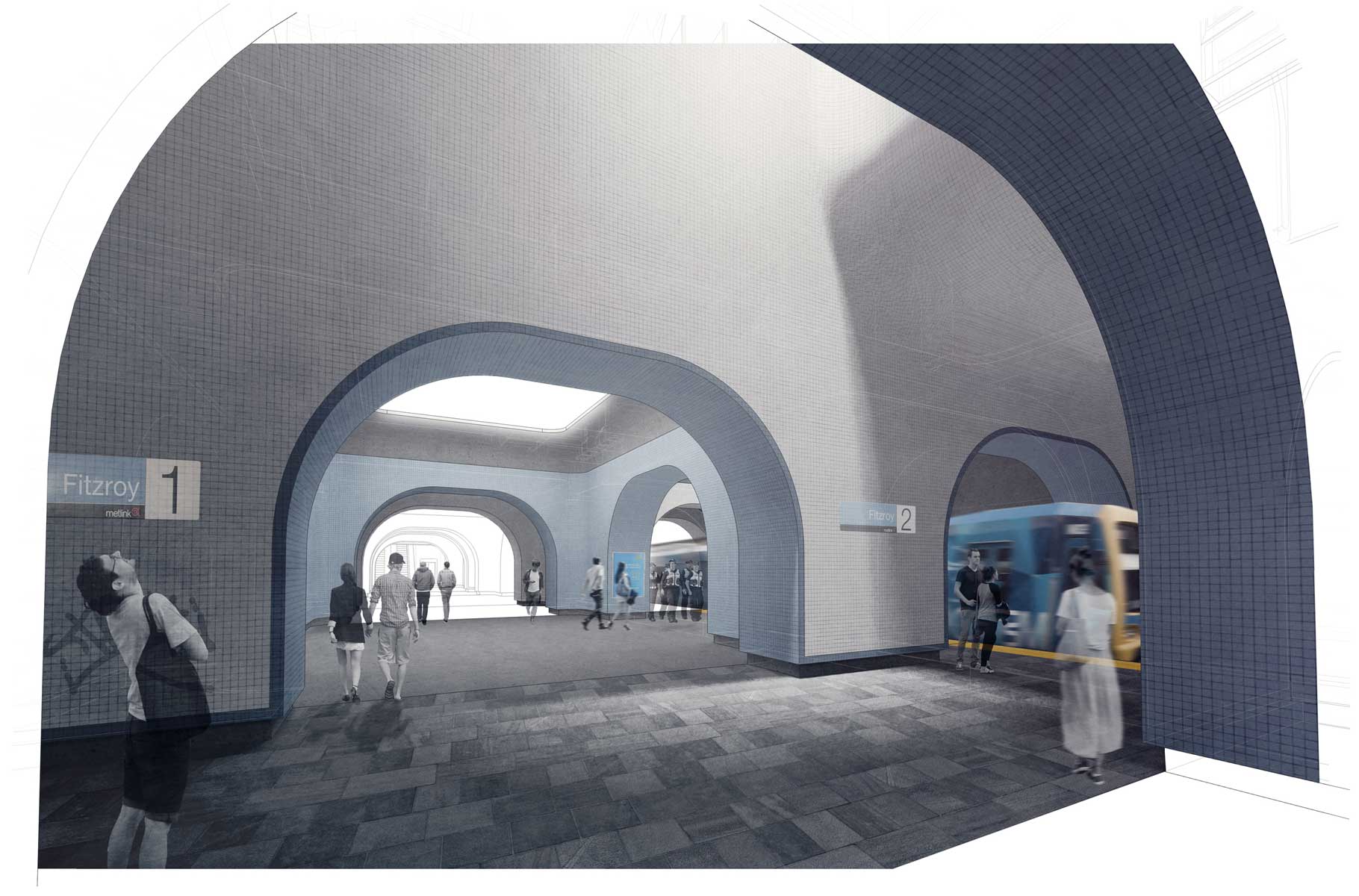 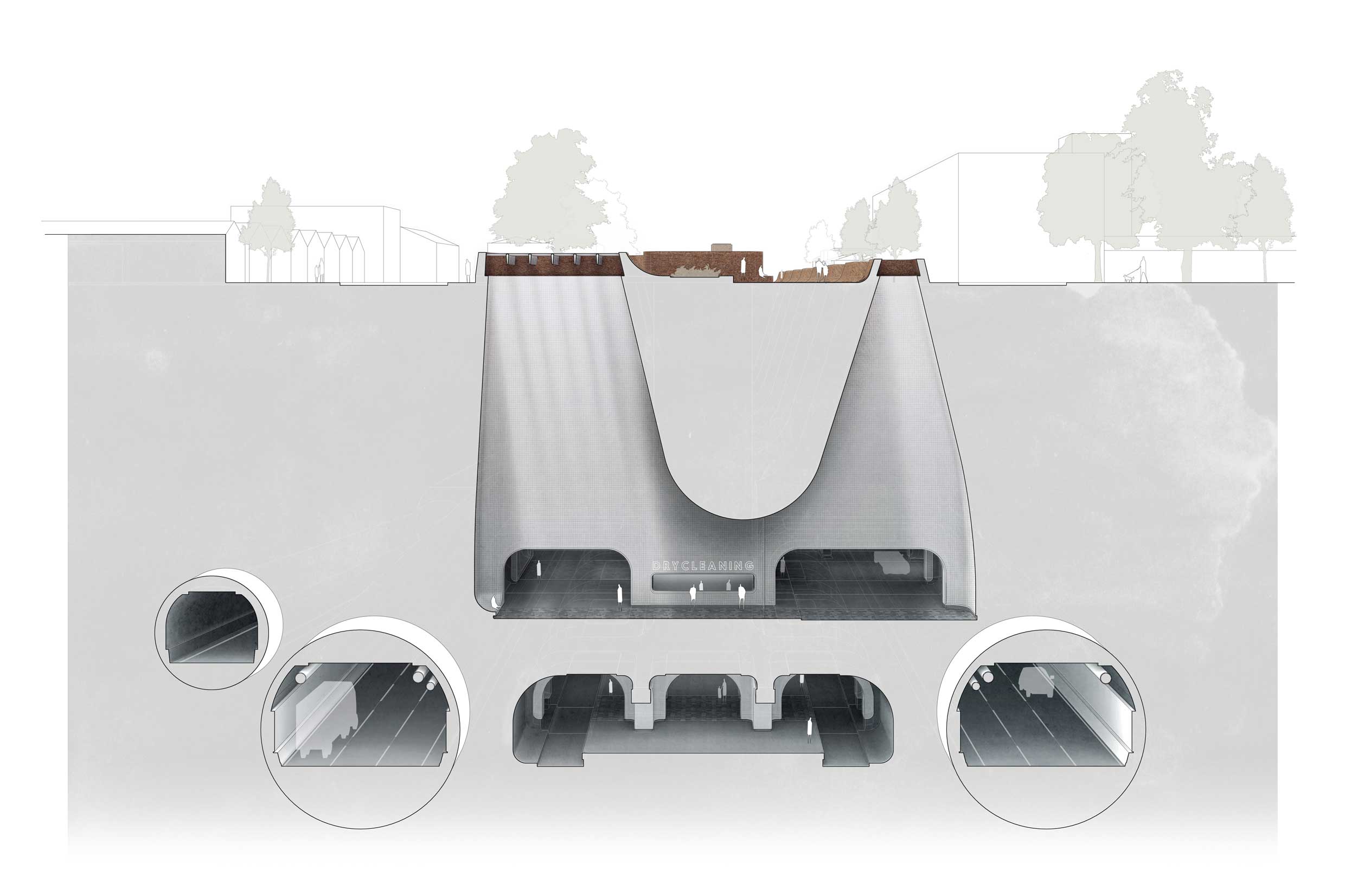 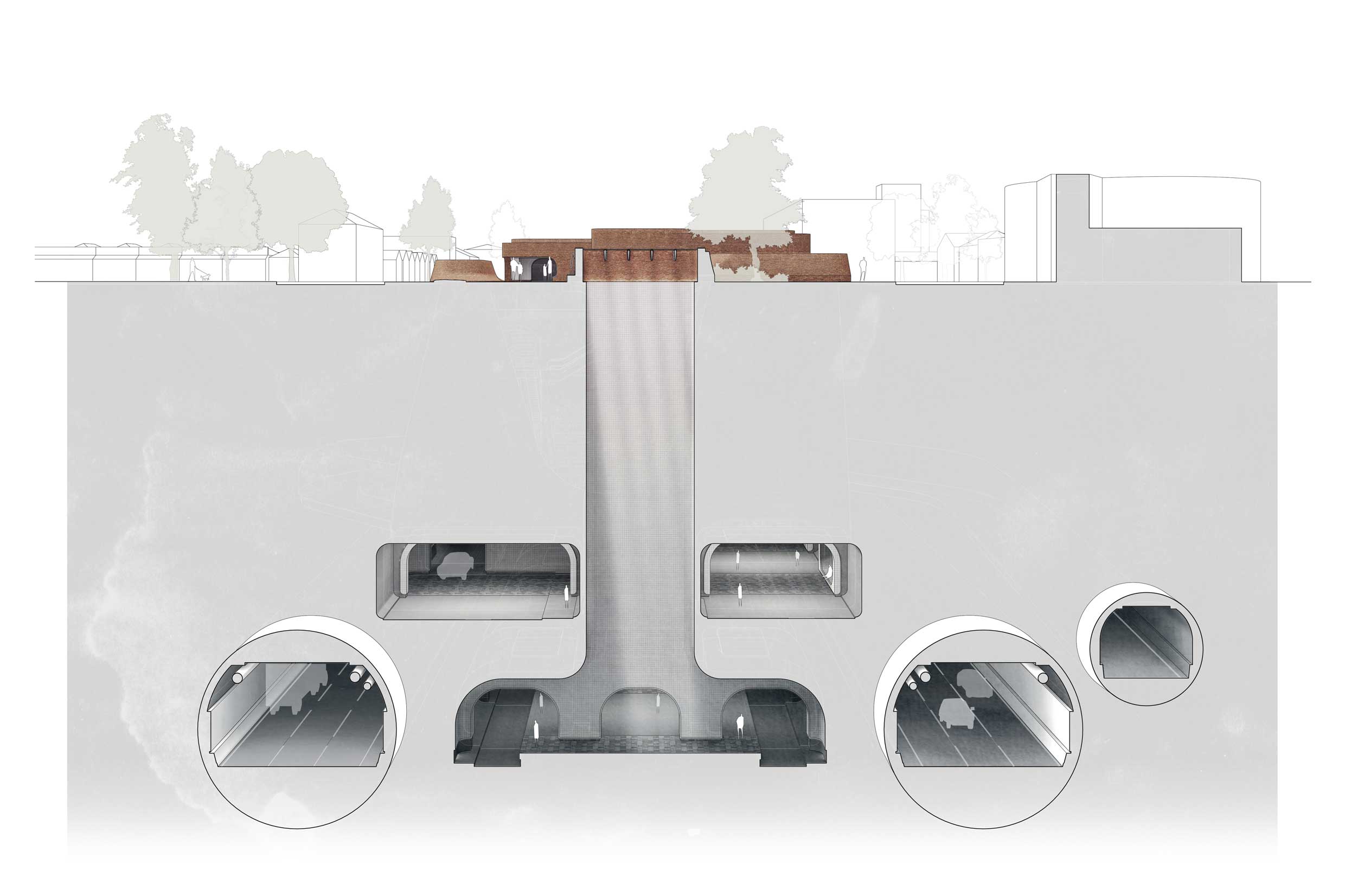 The project expands on the proposed EastWestLink road tunnel to accommodate a new train line and the services necessary to support the two transport routes. The focus of the project is a train and service station beneath Alexandra Parade between Brunswick St and Smith St. The amalgamation of both the road and rail/train and service station, into a single volume, sharing retail and other services (convenience store, drycleaner, locksmith, cafe, newsagency etc.) comes as a response to the compressive nature of building below ground, forcing programs to distort, scale and stretch to fit around each other and the language of the tunnel. By moving and expanding on the major transport routes below ground allows for the expansion and rejuvenation of the surface landscape. Alexandra Parade’s neglected median strip, which is currently seen as an extension of the road network, can expand and become an occupiable public landscape activated by the new train station, returning it to the pedestrian domain, its function as a park and creating a new link between the northern and southern side of Alexandra Parade. The proposal approaches architecture first as an interior, this interior shapes the exterior which then defines and begins to become occupiable where it meets landscape. The station is used as a catalyst to activate the new landscape, bringing people onto the site who can then encourage and support a larger variety of activities along Alexandra Parade. The train station’s civic role as a marker of place becomes evident in it’s creation and central focus within this landscape, sitting at the centre of the primary pedestrian crossing across Alexandra parade and the east-west axis between the tram stops on Brunswick St and Smith St. The scale of the interior volumes comes as a response to the traditional civic proportions of the train station and as a means of bringing natural light and sky views into the depths of station and connecting each level back to the surface landscape. These large volumes are clad in glazed tiles suggesting richness, ornament and reflecting light down into the deepest areas of the station. These large tiled voids are juxtaposed with lower, concrete vaults, that turn the emphasis to utility and structure, these concrete bays hold the utilitarian programs and additional services that support the train and service station.