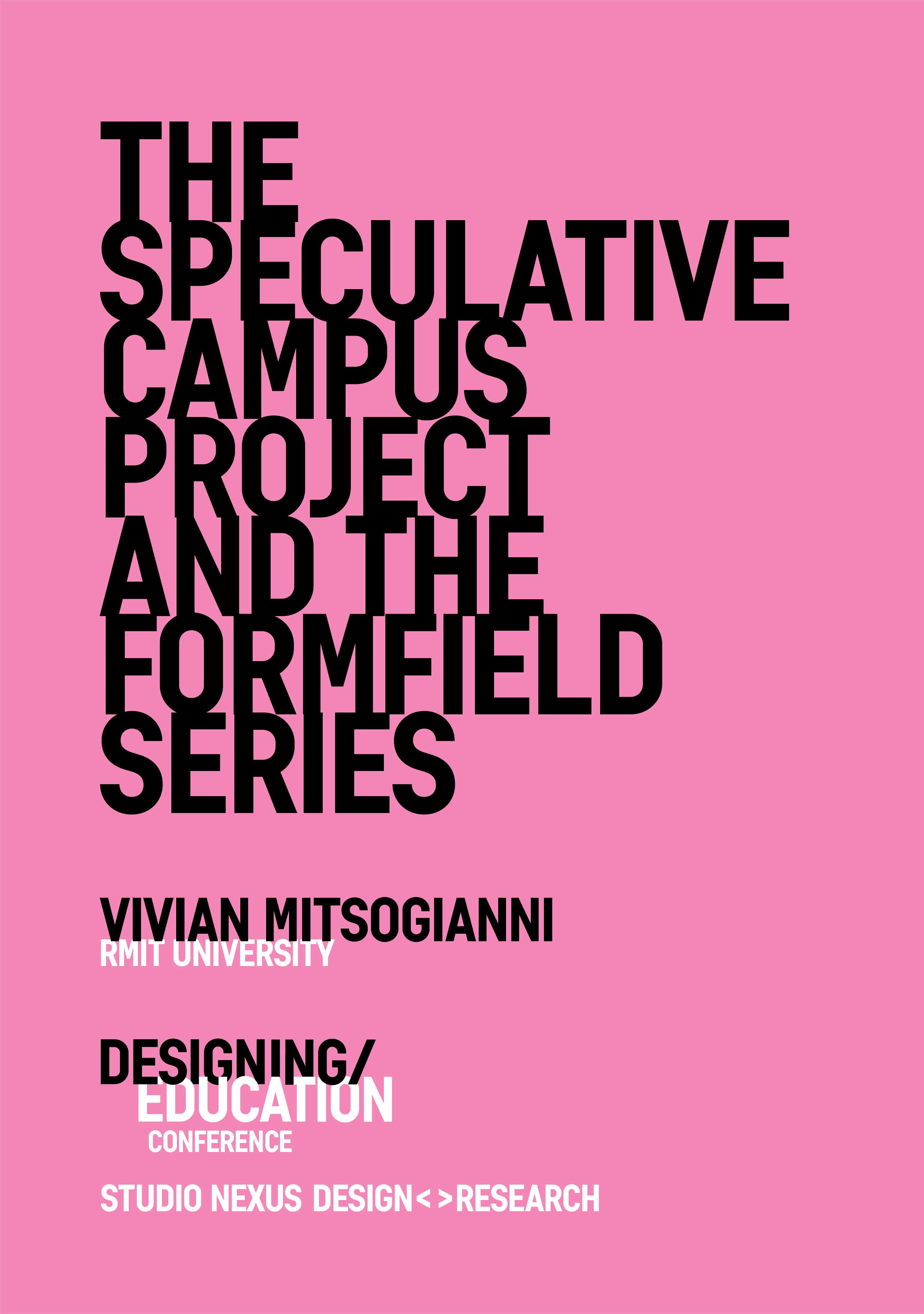 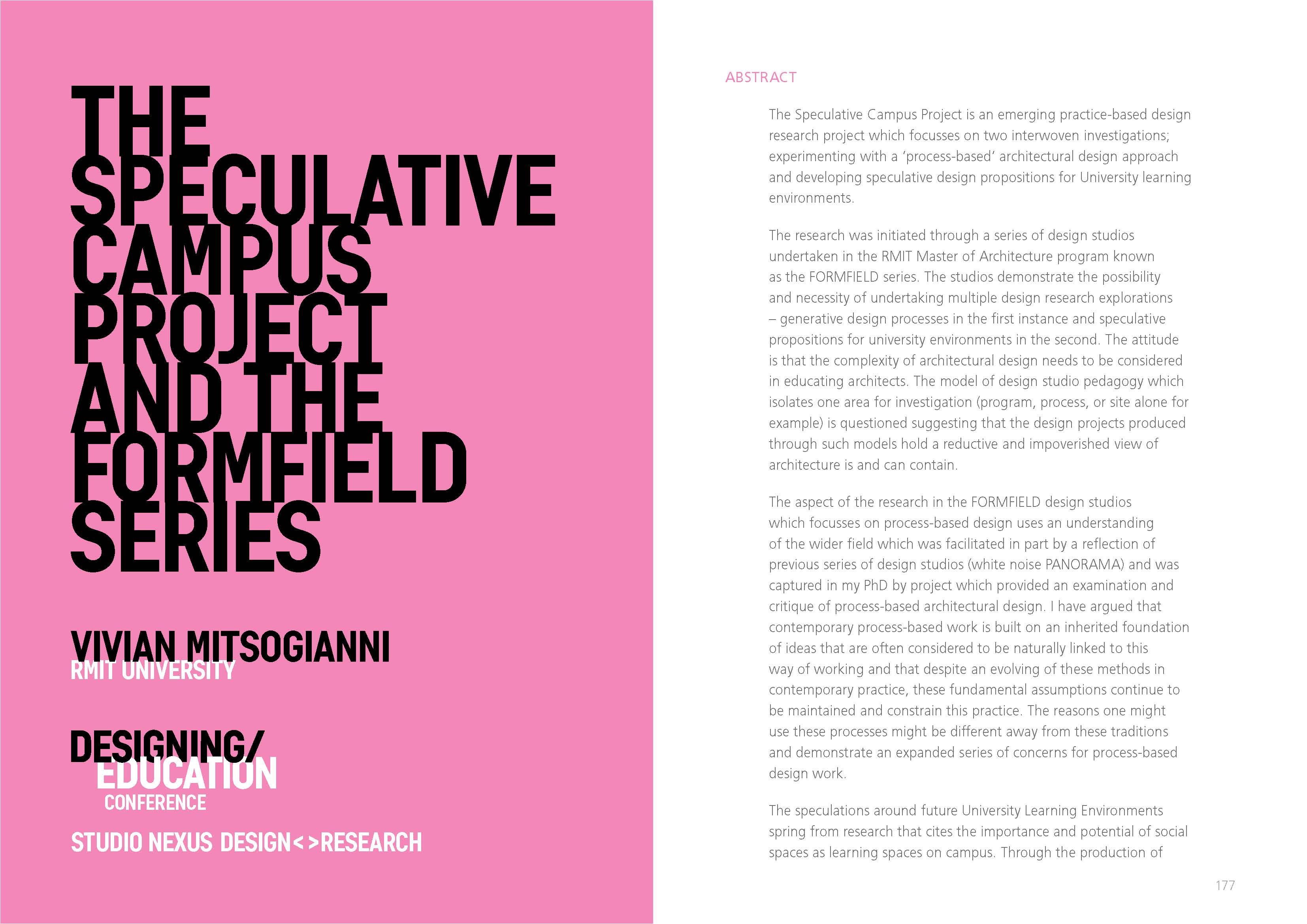 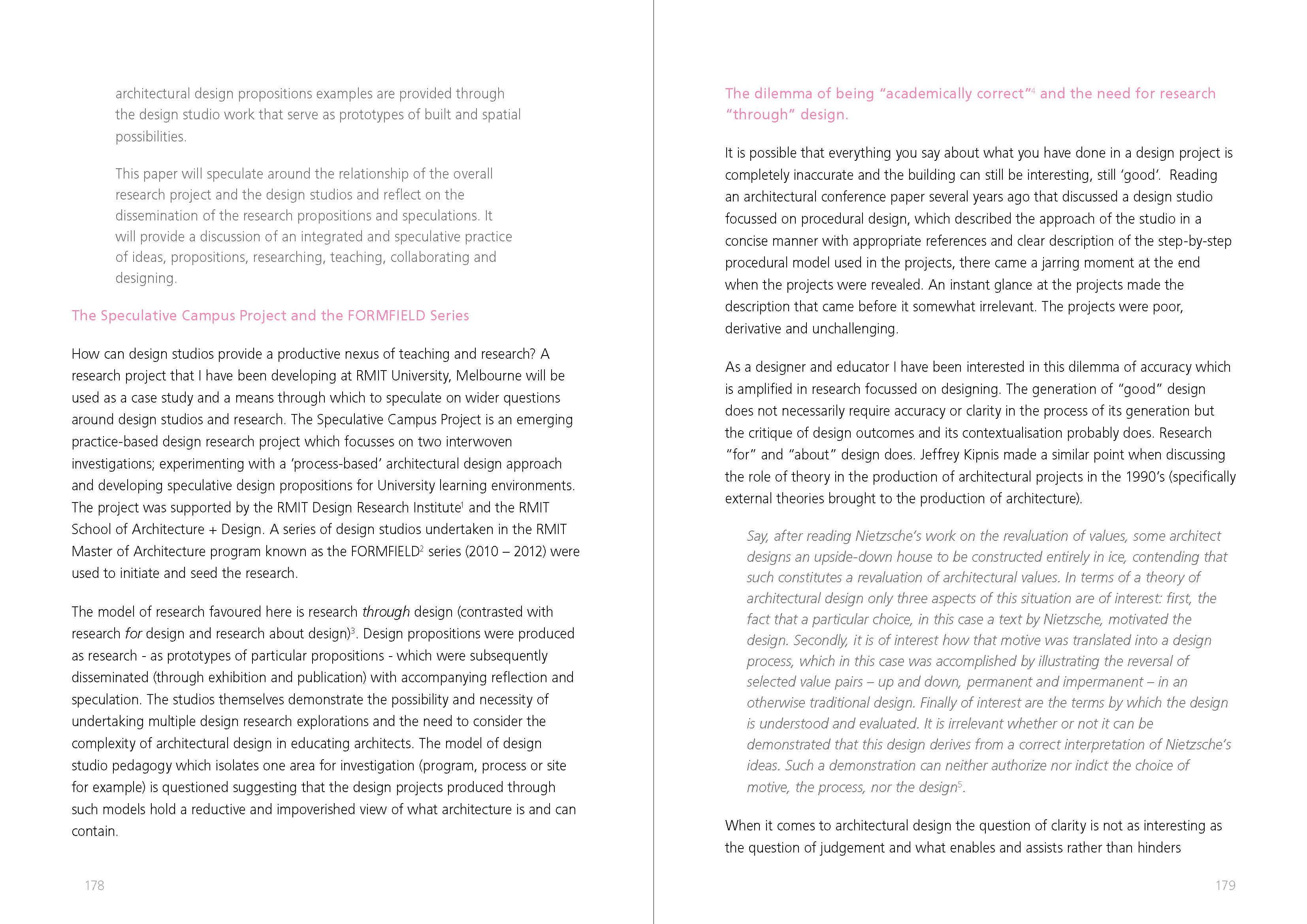 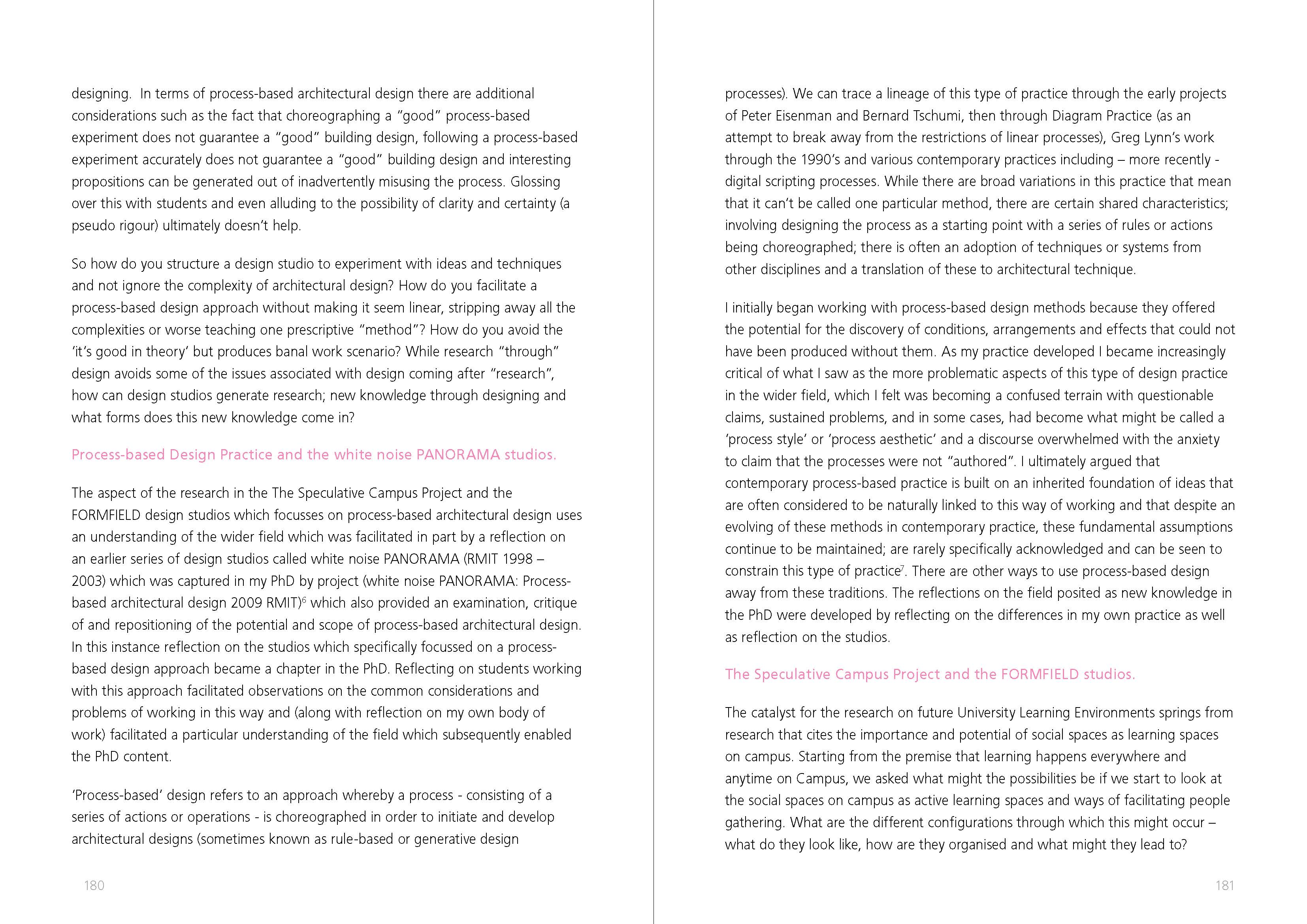 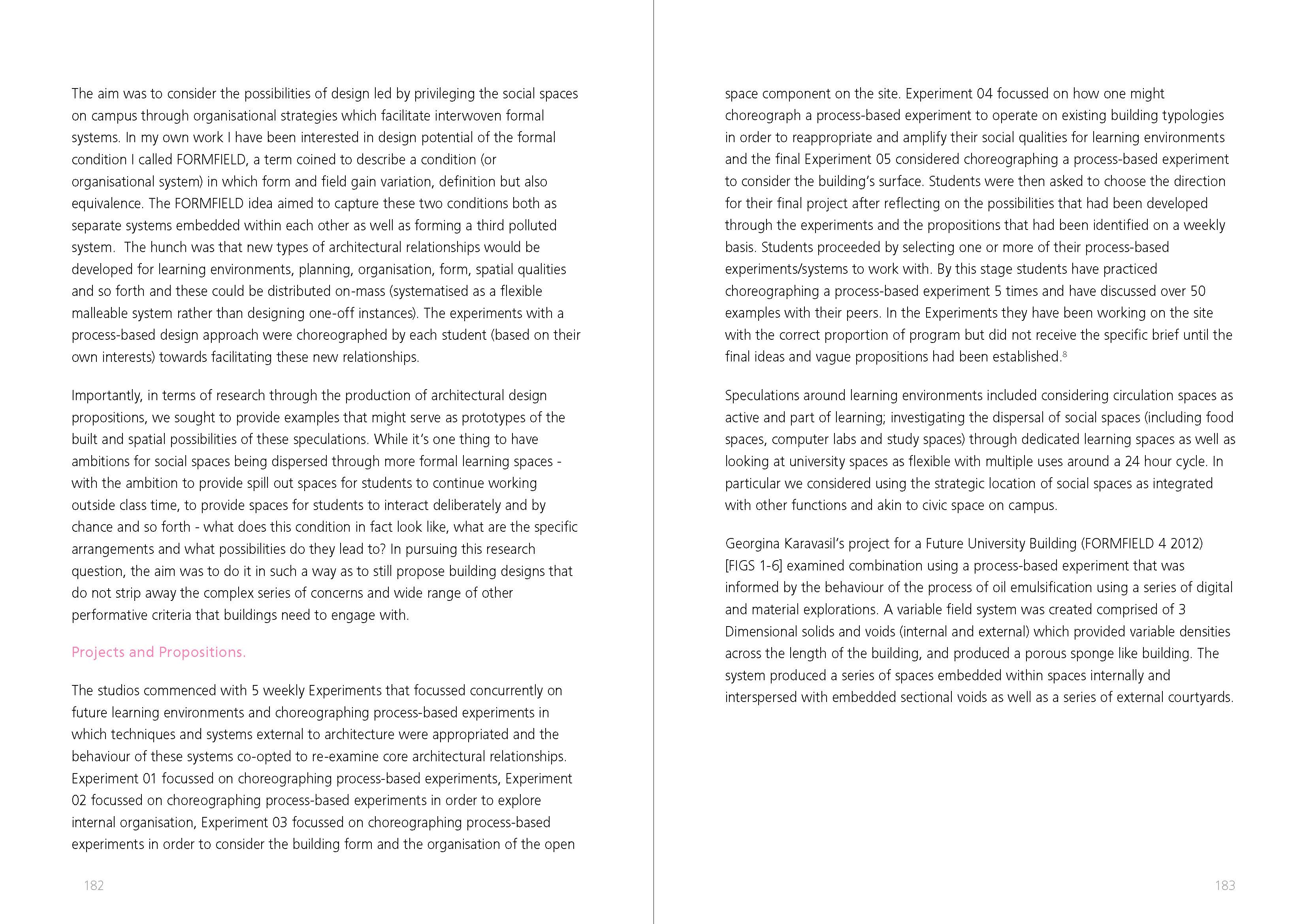 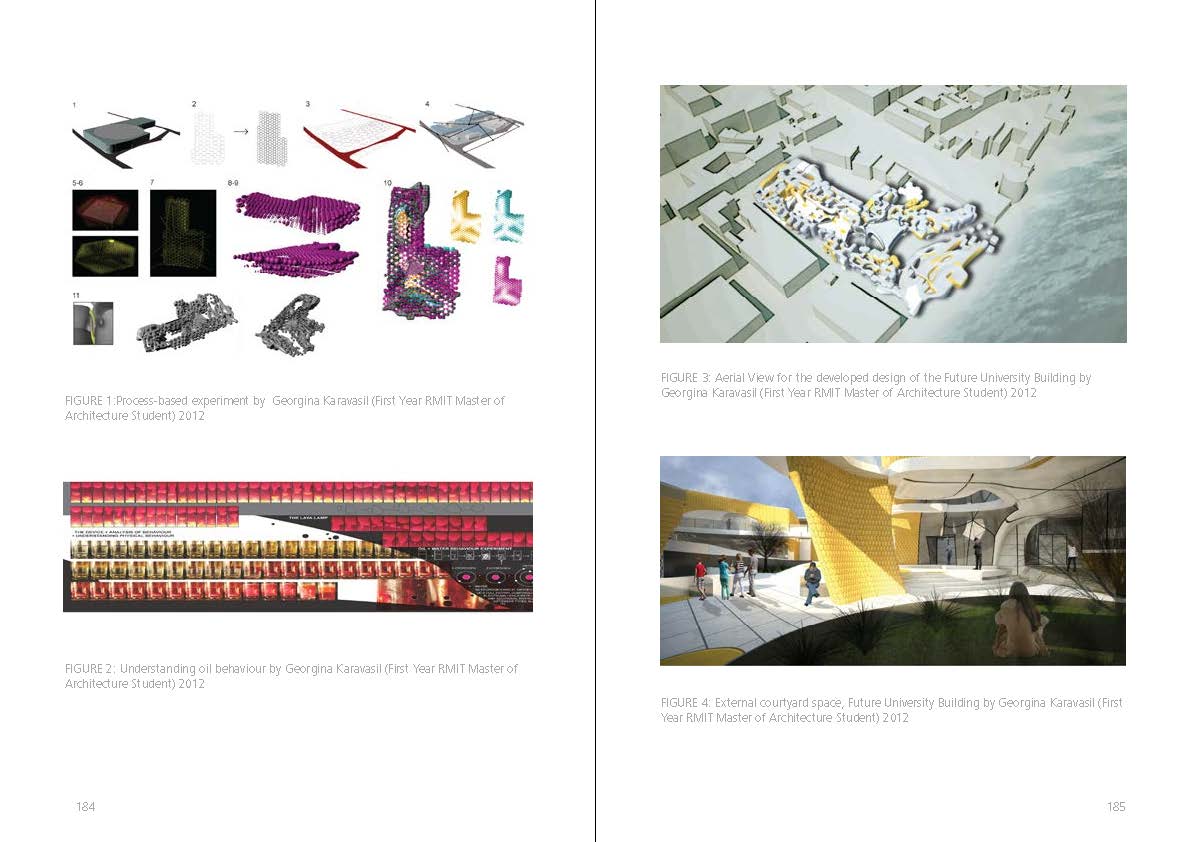 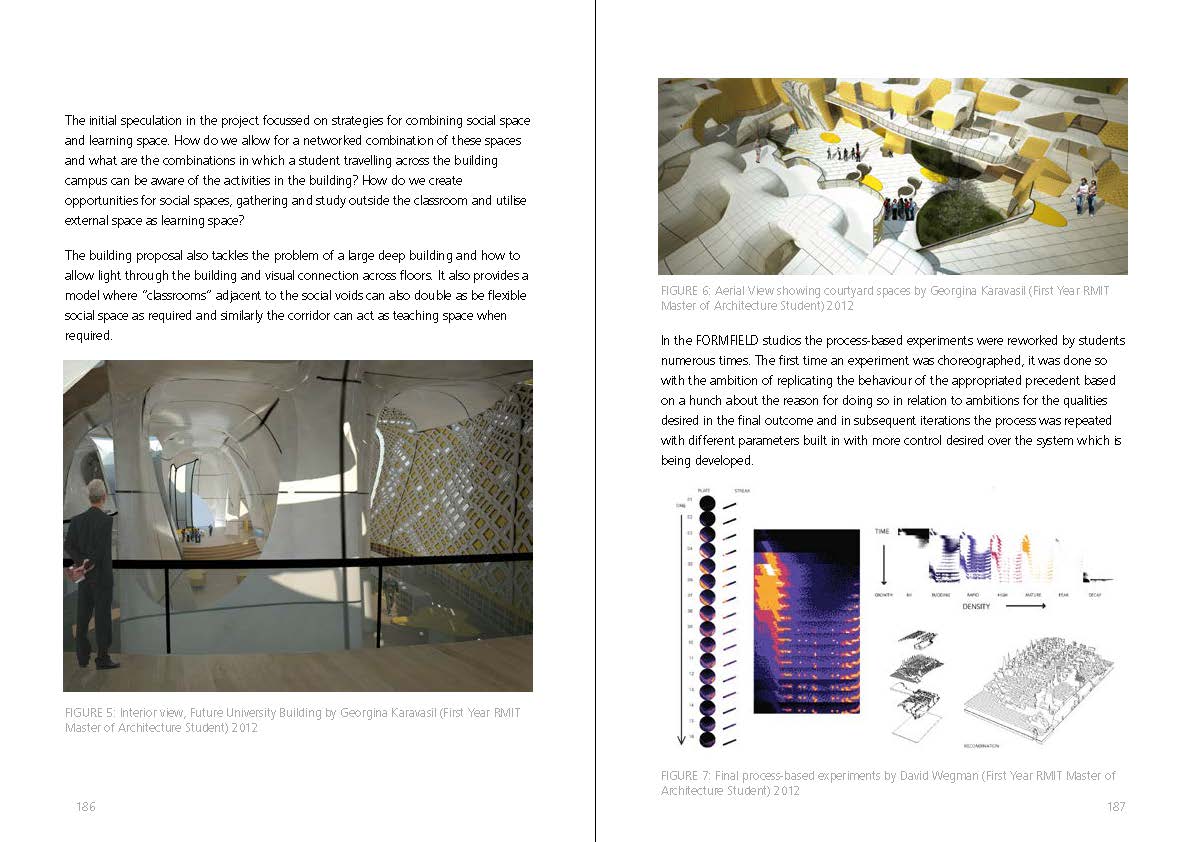 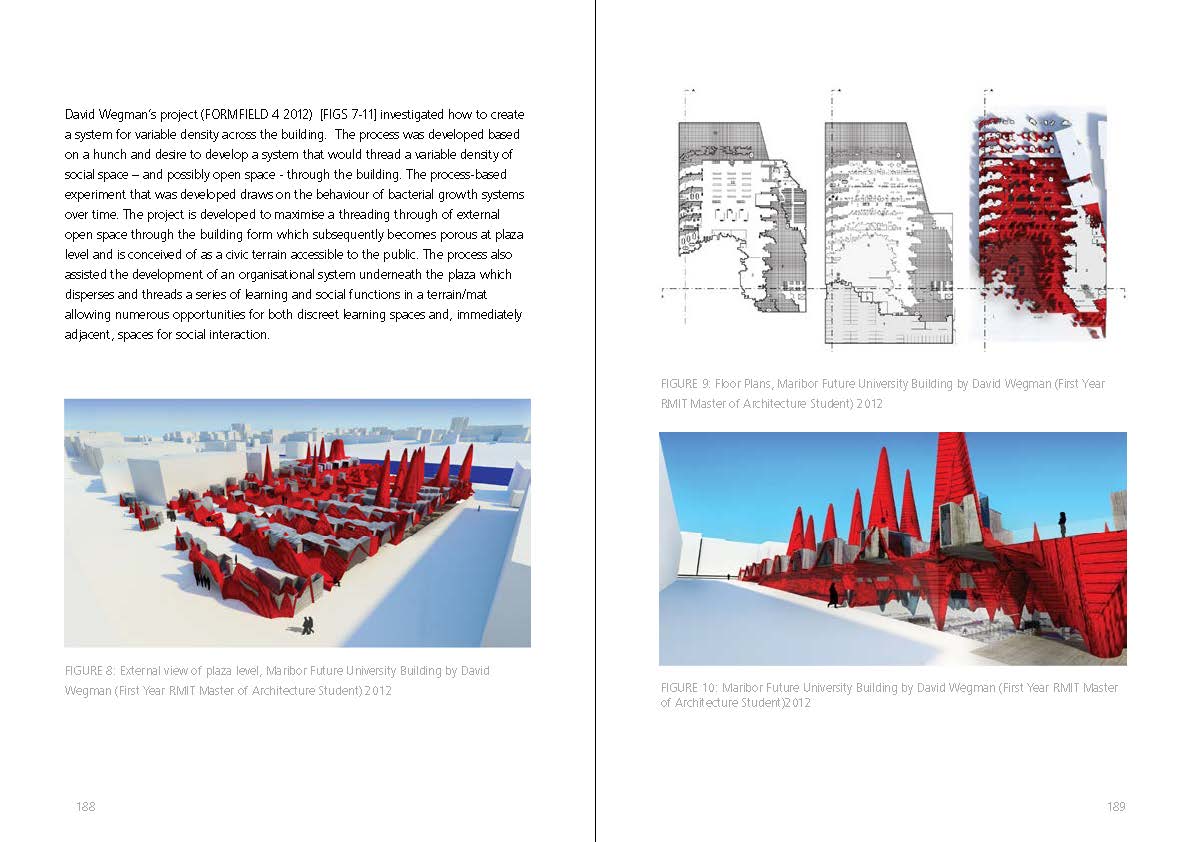 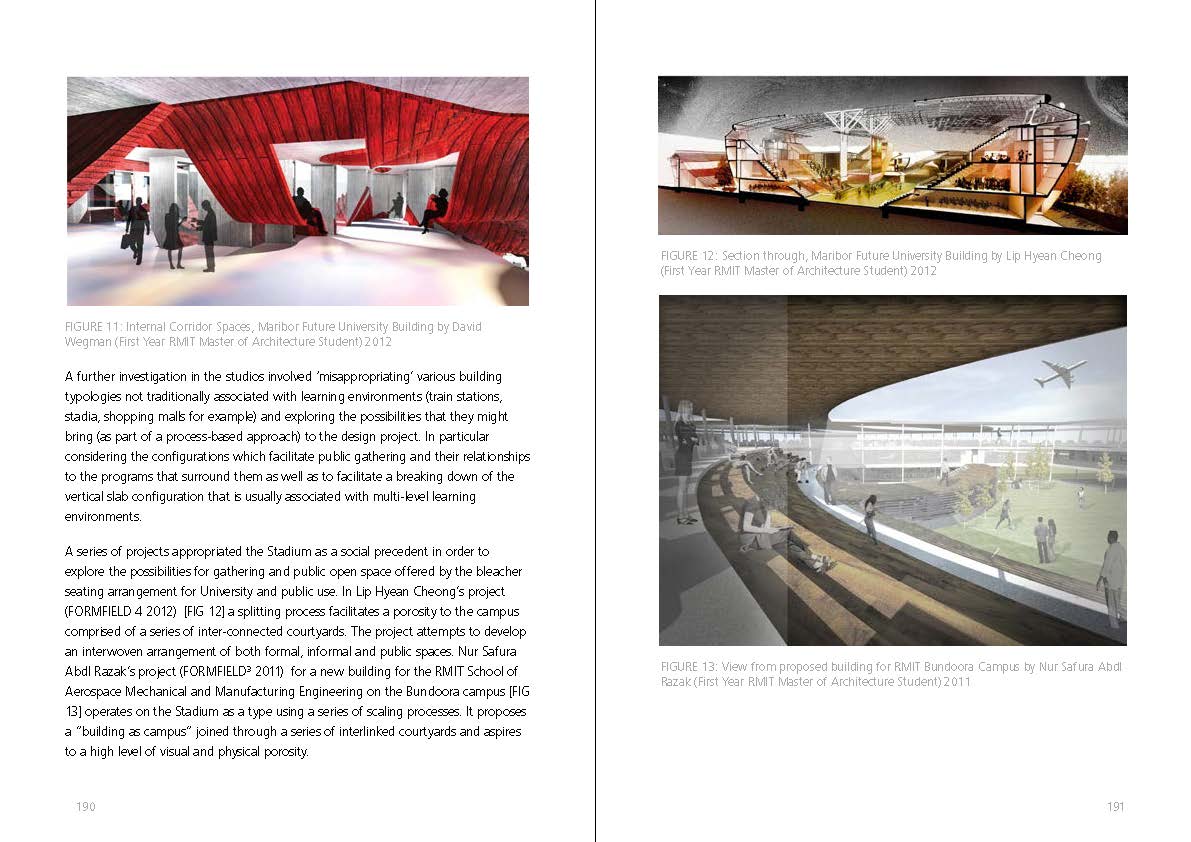 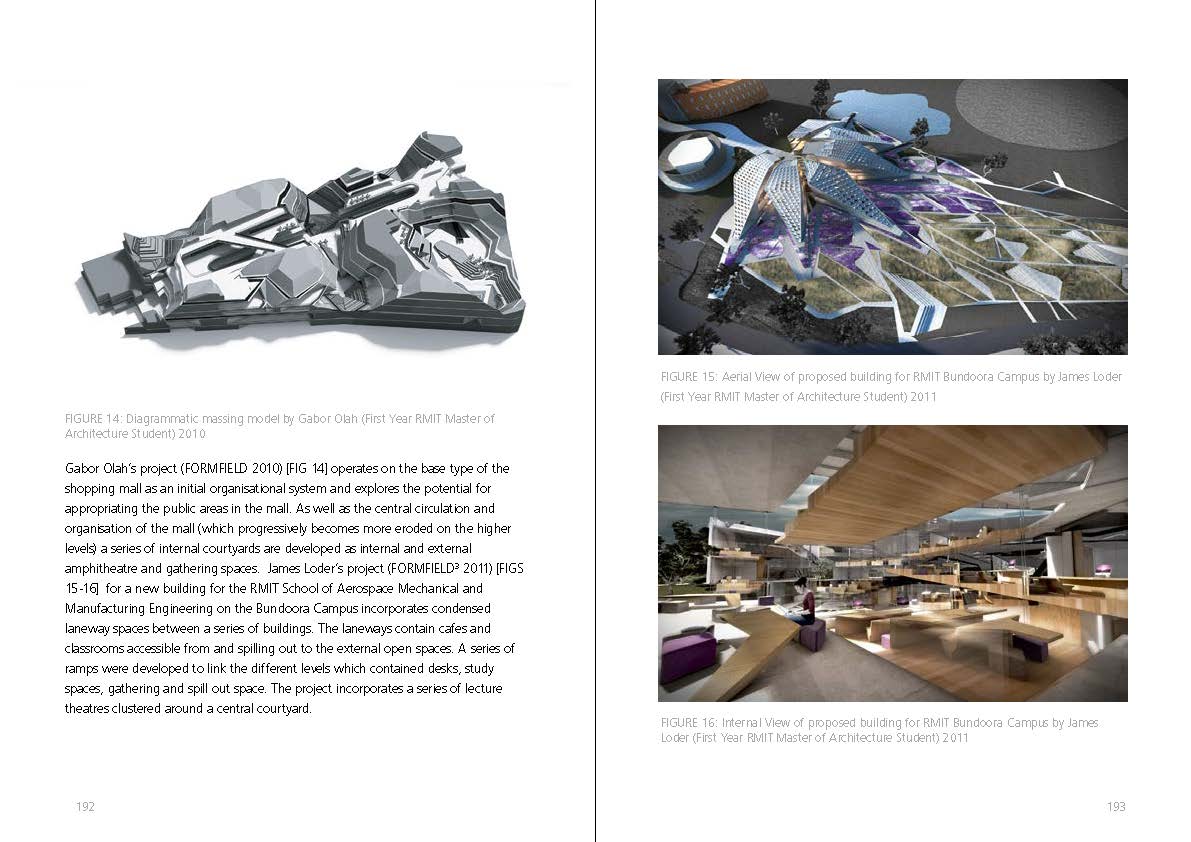 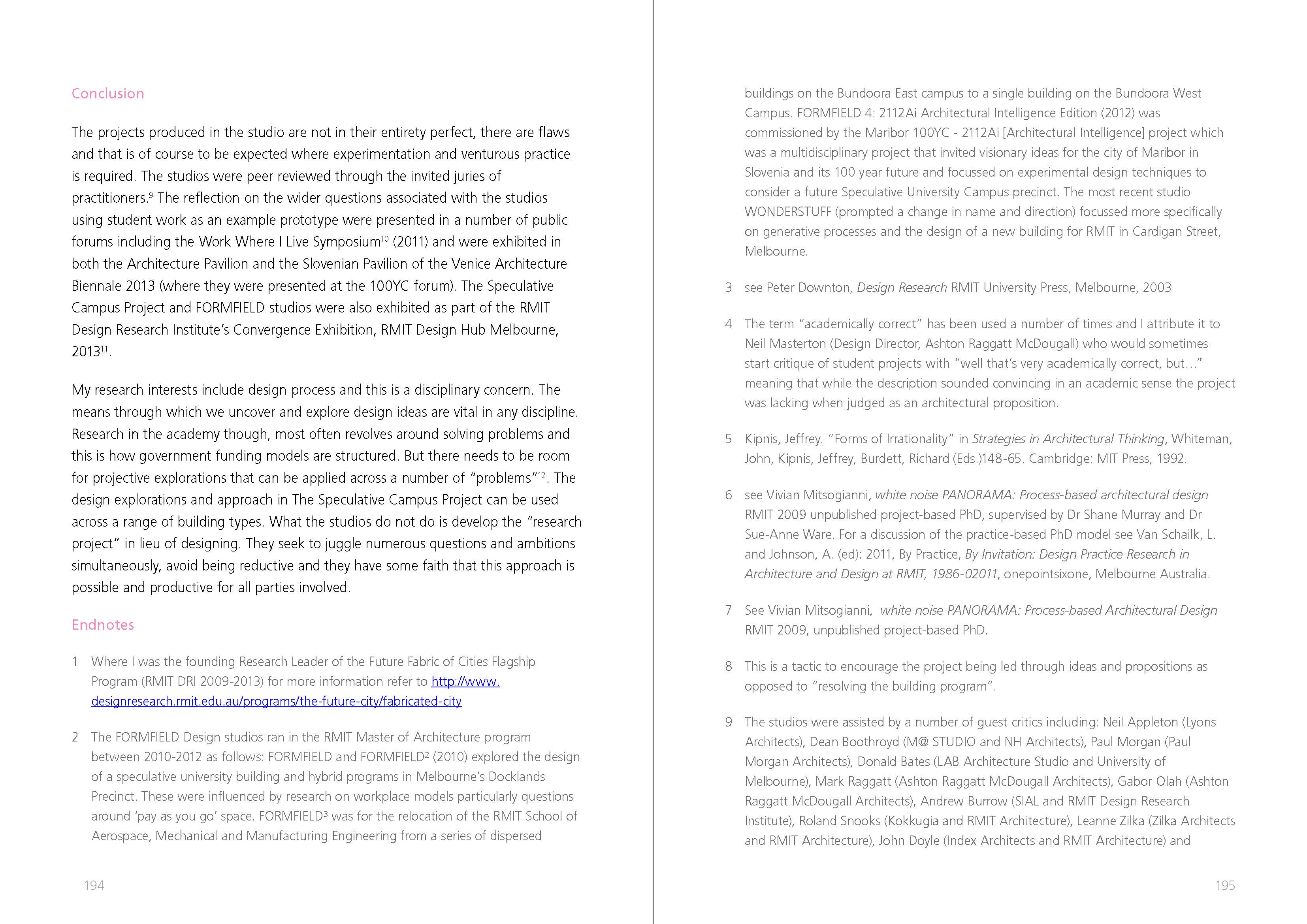 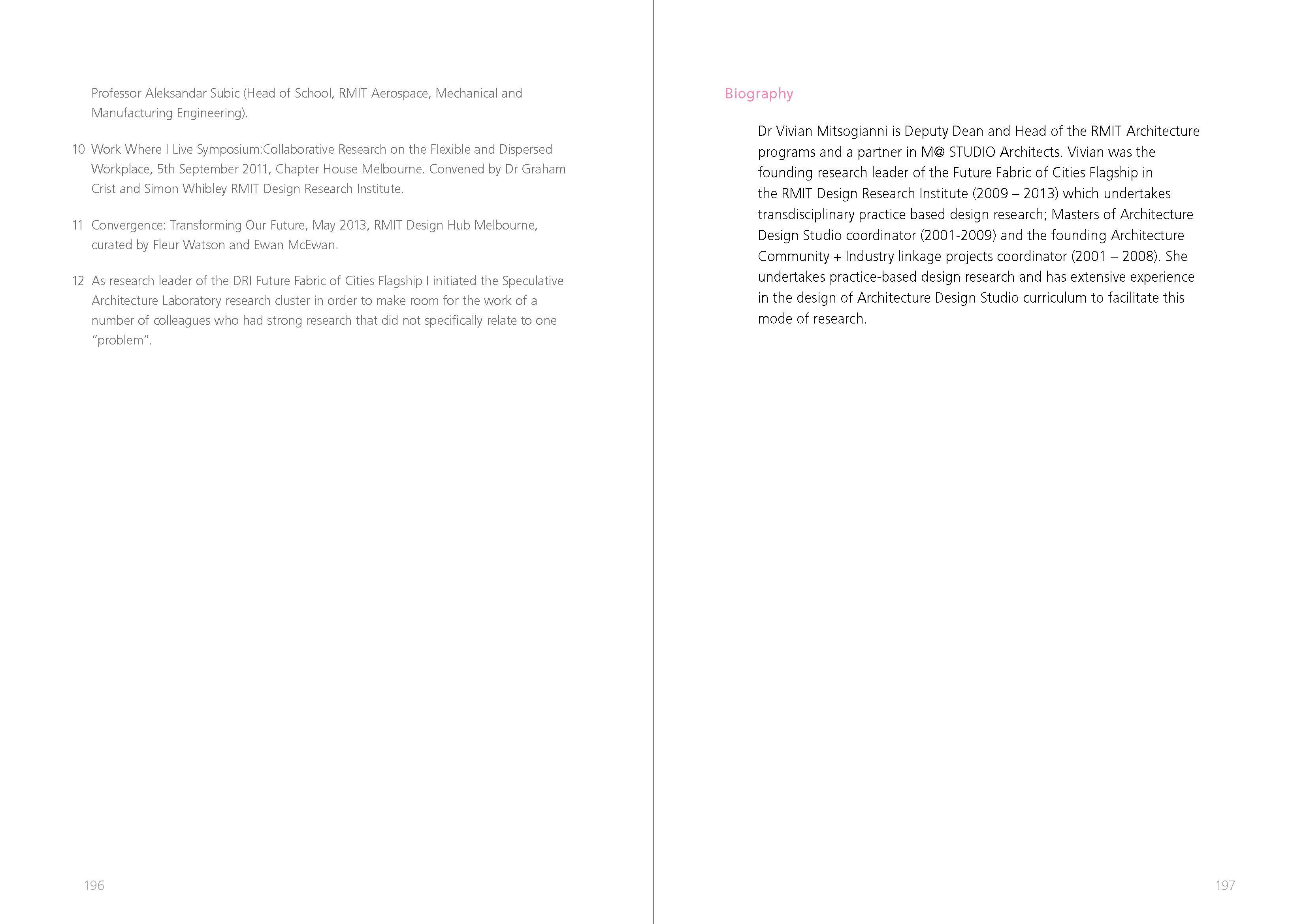 The research was initiated through a series of design studios undertaken in the RMIT Master of Architecture program known as the FORMFIELD series. The studios demonstrate the possibility and necessity of undertaking multiple design research explorations – generative design processes in the first instance and speculative propositions for university environments in the second. The attitude is that the complexity of architectural design needs to be considered in educating architects. The model of design studio pedagogy which isolates one area for investigation (program, process, or site alone for example) is questioned suggesting that the design projects produced through such models hold a reductive and impoverished view of architecture is and can contain.

The aspect of the research in the FORMFIELD design studios which focusses on process-based design uses an understanding of the wider field which was facilitated in part by a reflection of previous series of design studios (white noise PANORAMA) and was captured in my PhD by project which provided an examination and critique of process-based architectural design. I have argued that contemporary process-based work is built on an inherited foundation of ideas that are often considered to be naturally linked to this way of working and that despite an evolving of these methods in contemporary practice, these fundamental assumptions continue to be maintained and constrain this practice. The reasons one might use these processes might be different away from these traditions and demonstrate an expanded series of concerns for process-based design work.

The speculations around future University Learning Environments spring from research that cites the importance and potential of social spaces as learning spaces on campus. Through the production of architectural design propositions examples are provided through the design studio work that serve as prototypes of built and spatial possibilities.

This paper speculates around the relationship of the overall research project and the design studios and reflect on the dissemination of the research propositions and speculations. It will provide a discussion of an integrated and speculative practice of ideas, propositions, researching, teaching, collaborating and designing.