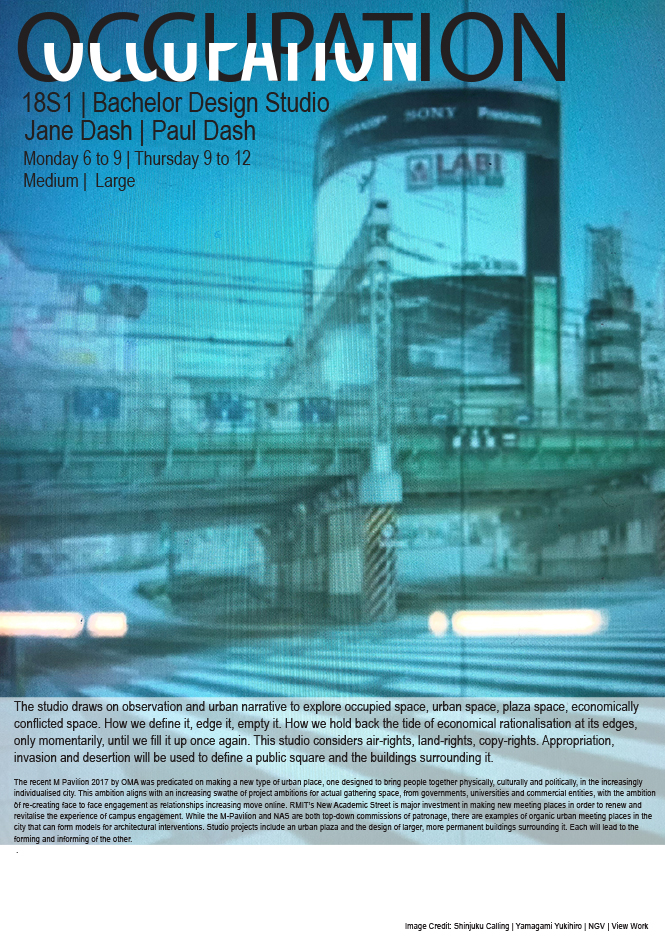 The studio draws on observation and urban narrative to explore occupied space, urban space, plaza space, economically conflicted space. How we define it, edge it, empty it. How we hold back the tide of economical rationalisation at its edges, only momentarily, until we fill it up once again. This studio considers air-rights, land-rights, copy-rights. Appropriation, invasion and desertion will be used to define a public square and the buildings surrounding it.

The recent M Pavilion 2017 by OMA was predicated on making a new type of urban place, one designed to bring people together physically, culturally and politically, in the increasingly individualised city. This ambition aligns with an increasing swathe of project ambitions for actual gathering space, from governments, universities and commercial entities, with the ambition of re-creating face to face engagement as relationships increasing move online. RMIT’s New Academic Street is major investment in making new meeting places in order to renew and   revitalise the experience of campus engagement. While the M-Pavilion and NAS are both top-down commissions of patronage, there are examples of organic urban meeting places in the city that can form models for architectural interventions. Studio projects include an urban plaza and the design of larger, more permanent buildings surrounding it. Each will lead to the forming and informing of the other.