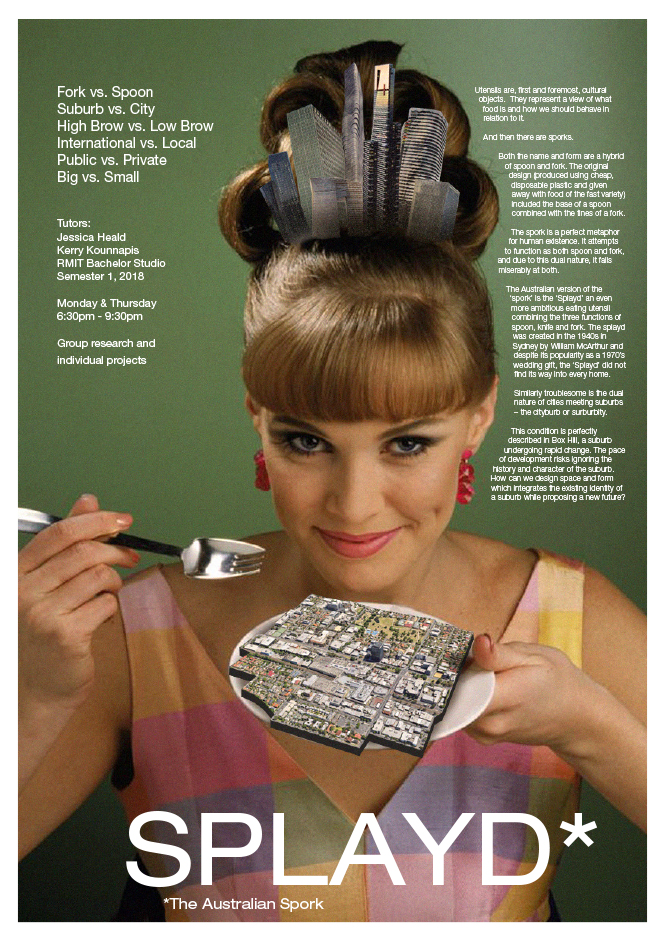 Fork vs. Spoon Suburb vs. City High Brow vs. Low Brow International vs. Local Public vs. Private Big vs. Small

Utensils are, first and foremost, cultural objects.  They represent a view of what food is and how we should behave in relation to it.

And then there are sporks. Both the name and form are a hybrid of spoon and fork. The original design (produced using cheap, disposable plastic and given away with food of the fast variety) included the base of a spoon combined with the tines of a fork. The spork is a perfect metaphor for human existence. It attempts to function as both spoon and fork, and due to this dual nature, it fails miserably at both. The Australian version of the ‘spork’ is the ‘Splayd’ an even more ambitious eating utensil combining the three functions of spoon, knife and fork. The splayd was created in the 1940s in Sydney by William McArthur and despite its popularity as a 1970’s wedding gift, the ‘Splayd’ did not find its way into every home.
Similarly troublesome is the dual nature of cities meeting suburbs – the cityburb or surburbity. This condition is perfectly described in Box Hill, a suburb undergoing rapid change. The pace of development risks ignoring the history and character of the suburb. How can we design space and form which integrates the existing identity of a suburb while proposing a new future?