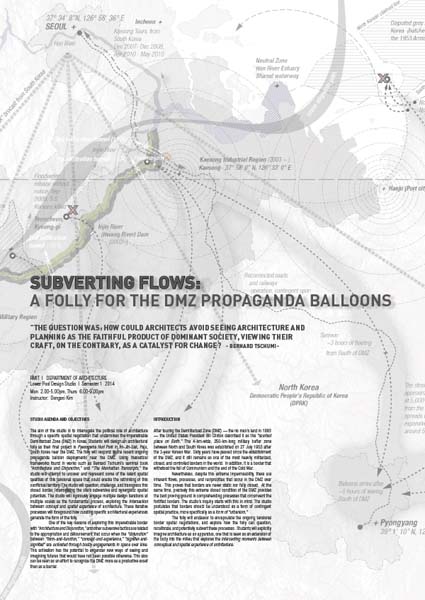 The aim of the studio is to interrogate the political role of architecture through a specific spatial negotiation that undermines the impenetrable Demilitarized Zone (DMZ) in Korea. Students will design an architectural folly as their final project in Pyeongwha Nuri Park in Im-Jin-Gak, Paju, South Korea near the DMZ. The folly will respond to the recent ongoing propaganda balloon deployments near the DMZ. Using theoretical frameworks found in works such as Bernard Tschumi’s seminal book “Architecture and Disjunction,” and “The Manhattan Transcripts,” the studio will attempt to uncover and represent some of the latent spatial qualities of this tensional space that could enable the rethinking of this conflictual territory. The studio will question, challenge, and transgress this closed border, interrogating the site’s subversive and synergistic spatial potentials. The studio will rigorously engage multiple design iterations at multiple scales as the fundamental process, exploring the intersection between concept and spatial experience of architecture. These iterative processes will foreground how curating specific architectural experiences generate the form of the folly. One of the key reasons of exploring this impenetrable border with “Architecture and Disjunction,” and other subversive tactics are related to the appropriation and détournement that occur when the “disjunction” between “form-and-function,” “concept-and-experience,” “signifier-and signified” are activated through bodily engagements in space over time. This activation has the potential to engender new ways of seeing and imagining futures that would have not been possible otherwise. This also can be seen as an effort to recognize the DMZ more as a productive asset than as a barrier.

The studio postulates that borders should be understood as a form of contingent spatial practice, more specifically as a form of “urbanism.” The folly will endeavor to encapsulate the ongoing tensional border spatial negotiations, and explore how the folly can question, recalibrate, and potentially subvert these processes. Students will explicitly imagine architecture as an apparatus, one that is seen as an extension of the body into the milieu that explores the intersecting moments between conceptual and spatial experience of architecture.