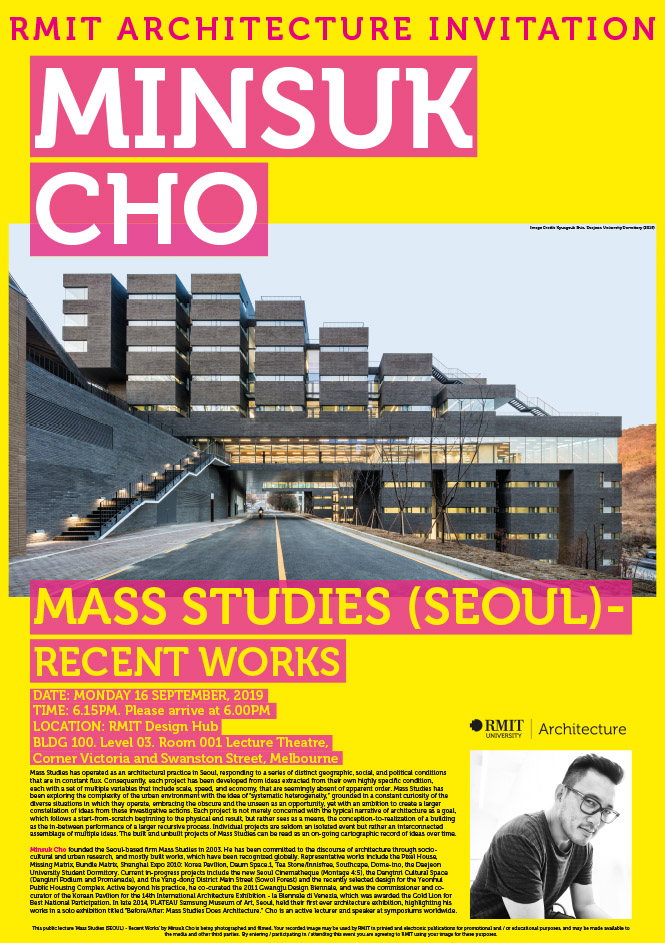 RMIT Architecture invites you to a free public lecture by MINSUK CHO of MASS STUDIES.

Mass Studies has operated as an architectural practice in Seoul, responding to a series of distinct geographic, social, and political conditions that are in constant flux. Consequently, each project has been developed from ideas extracted from their own highly specific condition, each with a set of multiple variables that include scale, speed, and economy, that are seemingly absent of apparent order. Mass Studies has been exploring the complexity of the urban environment with the idea of “systematic heterogeneity,” grounded in a constant curiosity of the diverse situations in which they operate, embracing the obscure and the unseen as an opportunity, yet with an ambition to create a larger constellation of ideas from these investigative actions. Each project is not merely concerned with the typical narrative of architecture as a goal, which follows a start-from-scratch beginning to the physical end result, but rather sees as a means, the conception-to-realization of a building as the in-between performance of a larger recursive process. Individual projects are seldom an isolated event but rather an interconnected assemblage of multiple ideas. The built and unbuilt projects of Mass Studies can be read as an on-going cartographic record of ideas over time.

Minsuk Cho founded the Seoul-based firm Mass Studies in 2003. He has been committed to the discourse of architecture through socio-cultural and urban research, and mostly built works, which have been recognized globally. Representative works include the Pixel House, Missing Matrix, Bundle Matrix, Shanghai Expo 2010: Korea Pavilion, Daum Space.1, Tea Stone/Innisfree, Southcape, Dome-ino, the Daejeon University Student Dormitory. Current in-progress projects include the new Seoul Cinematheque (Montage 4:5), the Danginri Cultural Space (Danginri Podium and Promenade), and the Yang-dong District Main Street (Sowol Forest) and the recently selected design for the Yeonhui Public Housing Complex. Active beyond his practice, he co-curated the 2011 Gwangju Design Biennale, and was the commissioner and co-curator of the Korean Pavilion for the 14th International Architecture Exhibition – la Biennale di Venezia, which was awarded the Gold Lion for Best National Participation. In late 2014, PLATEAU Samsung Museum of Art, Seoul, held their first ever architecture exhibition, highlighting his works in a solo exhibition titled “Before/After: Mass Studies Does Architecture.” Cho is an active lecturer and speaker at symposiums worldwide.